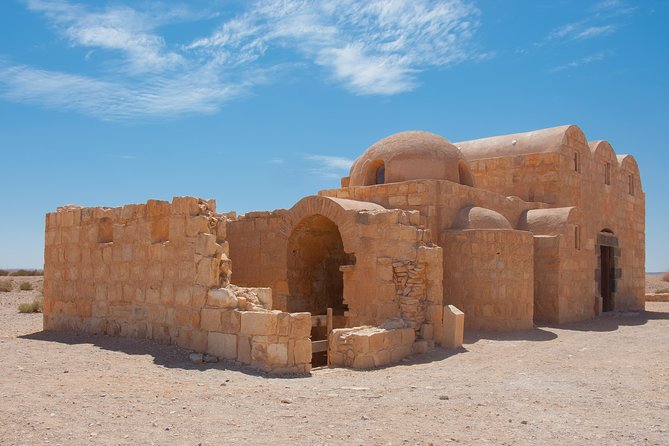 Discover the world of medieval Islamic art and architecture on this 1-day tour with private driver of the Eastern Desert castles. Setting out from your Dead sea hotel, you'll visit the UNESCO World Heritage Site of Qasr Amra, Qasr Kharana, first built by the Romans then completed by the Umayyad caliphs, and Qasr al-Asraq, where Lawrence of Arabia had his headquarters during World War 1. Tour includes entrance fees but excludes guides, food, and drink.

Your driver will collect you from your Dead sea hotel around 8-8:30am in a private, climate-controlled vehicle to escort you to some of the great medieval sites of Jordan's Eastern Desert. Begin at Qasr al-Azraq, sculpted from black basalt at the heart of the al-Azraq oasis, the 13th-century fortress where T. E. Lawrence had his headquarters during World War I.

Next, you'll visit the UNESCO World Heritage site of Qasr Amra, an architectural masterpiece built in the heart of the desert early in the eighth century. While the castle itself no longer exists, the site is famous for the frescoes on the interior walls, including an accurate representation of the zodiac plotted on the ceiling of a bath-house.

The last stop is Qasr Kharana, one of the best-preserved Umayyad monuments in Arabia, a solid square slab most likely built for defensive purposes, although archaeologists still debate this. You'll return to your hotel around 5pm.

Hotel pickup and drop -off

Private transfer by climate-controlled vehicle according to number of participants

No refund for any services not taken by the clients