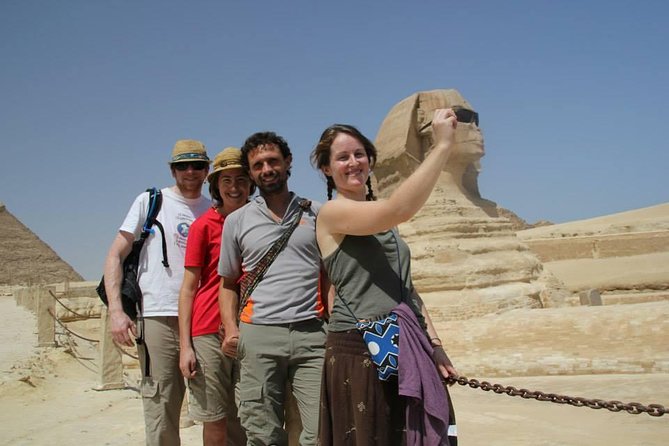 You can not come to visit Egypt without visiting the three pyramids! Discover the ancient Egyptian civilization and the magic of the desert. Also do not miss to watch the Sphinx statue, which shows the man's wisdom and power of the lion.

Start your private day tour with Multilingual Egyptologist tour guide to visiting the Great Pyramids - Cheops, Chephren and Mykerinos and have a close-up look at the Sphinx. The legendary guardian that stands by the huge funeral complex with its lion body and the head of king Chephren. Then moving 27 Km south-West away from Cairo to Visit the Pyramids of Sakkara.

Visit the Step Pyramid (Built for king Zoser), it is considered an important part in the process of the pyramid evolution. Then visit to the pyramids of Unna's & Oser-Kaf, the tomb of Mereruka, Ti & Pta-Hotep (Carved and painted tombs) after that moving to visit Memphis. Which was believed to be under the protection of the god Ptah, the patron of craftsmen. Its great temple, Hut-ka-Ptah (meaning "Enclosure of the ka of Ptah"), was one of the most prominent structures in the city. The name of this temple, rendered in Greek as A o (Ai-gy-ptos) by the historian Manetho, is believed to be the etymological origin of the modern English name Egypt.return back to your meeting point.

Soft Drink Through the tour

Entrance fees for interior of the pyramids