Private Full-Day Tour Of Assisi And Cortona From Florence 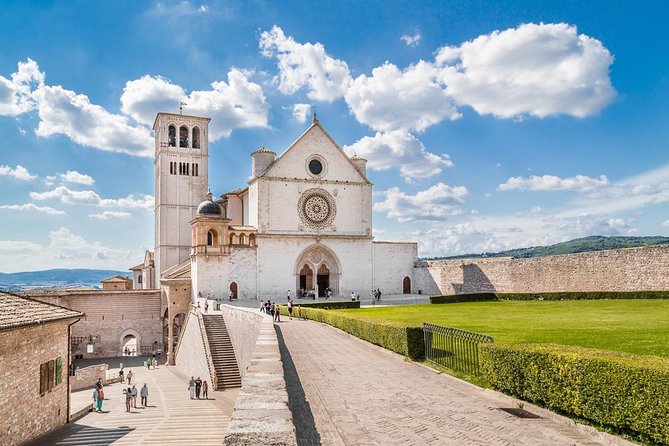 Relax on this private, full-day tour of Assisi and Cortona. Enjoy the personalized attention of your private driver and discover the place where St. Francis and St. Clare were born and visit the wonderful hilltop town of Cortona.A relaxing day trip between Umbria and Tuscany at your own pace!Hotel pickup and drop-off from Florence is included with a driver.

One of the most important churches of Assisi, with a marvellous white and pink marble facade

One of the most beautiful Basilicas of Italy, it's an incredible masterpiece of art and architecture. What is more, it hosts one of the most important cycles of frescoes painted by Giotto, one of the greatest Italian painters and innovators of our history

Assisi, where every stone emanates a bright aura, the undisputed home of St. Francis and St. Clare. Once in Assisi, you will have time to admire the town's two most famous churches, its quaint streets and alleyways and a bizarre church built over a Roman temple.

Featured in Audrey Wells romantic movie Under the Tuscan Sun, Cortona is a hilltop town rich in Etruscan relics, Medieval buildings and Renaissance works; in addition to being filled with many interesting things to see, it is also a fantastic place to stop for a glass of wine or take a pleasant walk with breathtaking views over Lake Trasimeno.

Free time in Assisi and Cortona

Local guides in Assisi and Cortona