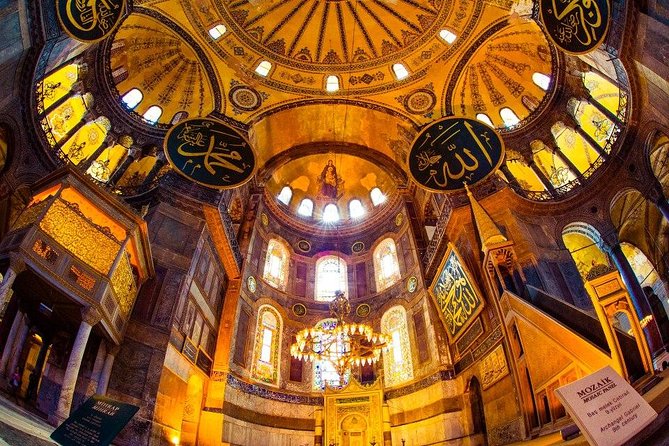 Discover the Byzantine history of Istanbul, including the Hagia sophia, the Chora Museum, and the Ecumenical Patriarchate. From the 4th to the 15th century, Constantinople was the capital of the Byzantine Empire. This private full-day tour with a guide will take you through the ruins of churches, cisterns, and houses to discover the mosaics, frescoes, and distinct architecture this empire left behind. The tour includes transportation in a private vehicle.

Your tour begins when your private driver and tour guide pick you up from your hotel or cruise ship.

Discover the architectural and artistic highlights of the Byzantine Empire that remain in Istanbul, such as the Chora Museum. The Chora Church is known for its ornate and intensely detailed mosaics and frescoes, which are among the best-preserved in Istanbul.

Visit the Ecumenical Patriarchate of Constantinople, located in the traditionally Greek neighborhood of Fener. This is still the active seat of Orthodox Christianity, and its importance is reflected in its opulence, with gold and chandeliers decorated the interior of the building.

Learn about the Zeyrek mosque, previously known as the Pantokrator Church. Composed of two Eastern Orthodox churches and a chapel, its the second-largest religious Byzatine building that remains in Istanbul.

Discover the splendor of the Hagia Sophia, a Byzantine church turned mosque turned museum and one of the citys most stunning monuments. The original building dates to the 6th century and has golden mosaics and colorful frescoes decorating its walls.

Descend into the dimly lit arched caverns of the Basilica Cistern, the sunken palace near the Hagia sophia. Its one of hundreds of rediscovered Byzantine cisterns that dot Istanbuls historic peninsula, and includes a stone Medusa head.

At the end of your tour, the driver will take you back to your hotel or cruise ship.