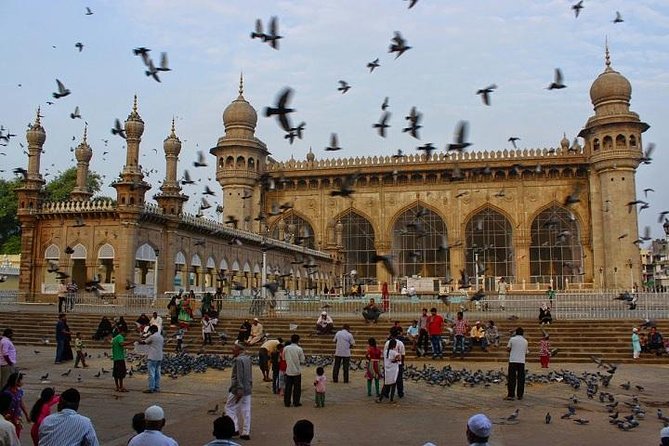 This 10-hour private tour takes you to exploresome of the country'smostpopularattractions such as Nehru zoological park, the Salar jung museum, Charminar and Mecca masjid. Enjoy going around Hyderabad city in the comfort of your own private air-conditioned vehicle, accompanied by your local guide.

At 8am, your English speaking guide will pick you up from your hotel to begin your full-day tour of Hyderabad.

Afterwards, exploreHussain Sagar Lake, one of the largest manmade lakes situated at the confluence of Hyderabad, Secunderabad and Begumpet. It is a sprawling artificial lake that holds water perennially. Its uniqueness lies in the fact that it connects the twin cities of Hyderabad and Secunderabad. The lake was built in the year 1575 by Sultan Ibrahim Kutb Shah at a cost of about Rs. 2.5 lakhs.

You can enjoylunch at local restaurant (at your own expense) beforeproceeding to Golkonda Fort. Situated west of Hyderabad, Golkonda Fort is like a tiny kingdom in itself. Colossal stone walls, rusted gates and ruins, reveal secrets of the Golkonda Fort, its grandeur and a bygone era. It was once a city of diamond trade and hence some brilliant gems like the koh-i-Noor and the Darya-i-Noor were excavated from the mines around Golkonda.

After, head to Salar jung museum, the third largest museum in India. Salar jung museum is popularly known forone of thelargest one-man collections of the world. It is definitely one of the must sees in Hyderabad.

Salar jung museum is located very close tothe Charminar monument which is an internationally recognized icon in the center of Hyderabad. With its minarets and domes, it showcases typical Islamic design. In one corner sits a beautiful mosque where mass prayers take place on Fridays. Tourists rarely leave the city without taking a trip to Charminar and the surrounding markets, which are filled with food and jewelry. The monument was built in 1591 to celebrate the end of a plague epidemic in Hyderabad.

Finally, explore Mecca masjid, located in the historical district of Hyderabad. Mecca masjid is the second largest mosque in India and one of the largest in the world. Several bricks embedded in the central arch are made with soil from Mecca hence the name Mecca masjid.

Your tour ends as your guide drops you back off to your hotel.