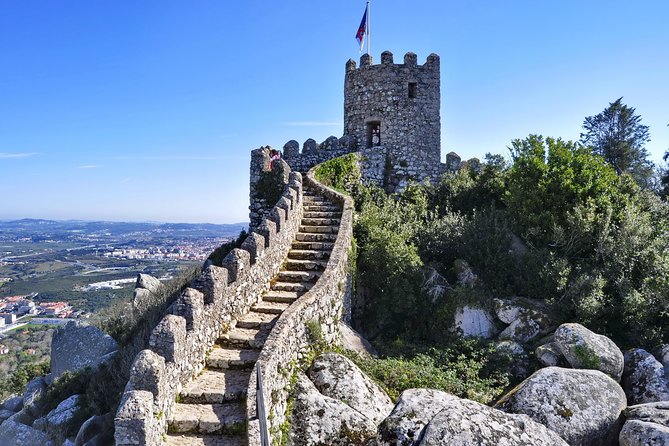 Discover the Moorish Castle, a military fortification testifying to the Islamic presence in the region. From the top of its walls you can admire a unique landscape, with the village of Sintra in the foreground and extending to the Atlantic Ocean. Meet Ericeria you will find countless flavors and generations of stories. See the iconic Mafra National Palace, a UNESCO World Heritage Site.

Were specialized in services and unique travels experiences in Portugal.
Our experience is your garantee that we understand, meet and exceed your expectations. We invite you to experience the authenticity of a full day tour through Moorist Castle, Ericeira & Mafra.

Itinerary
This is a typical itinerary for this product
Stop At: Castelo dos Mouros, Estrada da Pena Parque de Monserrate, Sintra 2710-609 Portugal
The Moorish Castle is a ruined castle nestled among the lush forests of the Sintra Mountains and is a popular tourist attraction of the land. The Moorish Castle was built during the 19th century by the North African Moors to guard the town of Sintra, but was abandoned after the Christian conquest in Portugal. The castle was restored in the 19th century. XIX by King Fernando II, who transformed it into a romantic ruins and one of the main features of the gardens of the Pena Palace. The castle retains the charm of an ancient ruin, with a dense forest surrounding the ancient walls offering spectacular views of the Sintra region. The Moorish Castle is a highly recommended attraction in Sintra and is quite different from the other palaces of the city, or the manor houses it features.
Duration: 2 hours
Stop At: Centro Historico de Sintra, Sintra 2710-616 Portugal
Sintra's historic center is an open-air museum full of magnificent treasures. The village of Sintra, at the base of the Sintra Mountains, was for a long time a royal sanctuary. Amidst its vast vegetation are incredible castles, palaces, gardens and farms. Sintra, with its imposing hills dotted with palaces, churches and manor estates, extending in waves of green to the ocean and the fascination of Vila Velha's urban agglomerations is a privileged place of excellence, of undeniable beauty and cultural and natural interest. . In 1995 it was classified as a World Heritage Site in the Cultural Landscape category by UNESCO.
Duration: 1 hour
Stop At: Aldeia Tipica Jose Franco, Estrada Nacional 116, Mafra 2640-578 Portugal
Jos Franco Village Museum is also commonly called Saloia Village, Cork Oak Typical Village or even Jos Franco Typical Village. This village is one of the most recognized musealized villages in the country. To tell the story of this village we have to go back to 1920, the year of the birth of potter Jos Franco. The son of a shoemaker and a door-to-door cookware saleswoman (and at fairs when business was weak), Jos Franco lived with the potter's trade from an early age. The Cork Oak was, at the time, an important potter center, and it is customary for the people of the earth to learn to handle the clay and make a profession of it. Franco learned the trade from two local potter masters before starting at age 17 on his own. In the early 1960s, Jos Franco began to shape an old dream, to recreate a village of ethnographic character, where the way of life of local people was mirrored. It was a form of tribute to his land.
Duration: 1 hour
Stop At: Palacio Nacional de Mafra, Terreiro Dom Joao v, Mafra 2640-492 Portugal
The National Palace of Mafra was proclaimed a UNESCO World Heritage Site in 2019. The Royal Palace occupies the noble floor of the Mafra building and the 2 turrets. The north turret was occupied by the king and the south turret by the queen, and both turrets are linked by a 232-metre gallery making it Europes largest palatial corridor. This building, of about 40,000 m2, housed a Franciscan convent (300 fryers) and features Campo Santo, the Infirmary, the Elliptical Hall (capitular), the Literary Acts Hall, the Stairway and the Dining Hall. It boasts a large library thought to be one of the most beautiful in the world. The Royal Building has two carillons with 98 bells the largest of its time. The Basilicas 6 organs are pieces of unique heritage worldwide. The Royal Convent and Palace of Mafra is the most important baroque monument in Portugal. The building covers an area of almost four hectares (37.790 m2), including 1.200 rooms, more than 4.700 doors and windows, 156 stairways and 29 inner yards and courtyards. Such magnificence was only possible due to the Brazilian gold that poured into the country, allowing the King to carry out his patronage of the arts and the strengthening of royal authority.
Duration: 1 hour
Stop At: Ericeira, 2655 Ericeira, Portugal
A traditional fishing village, Ericeira has developed enormously during the 20th century due to the growing interest in it as a summer resort. It has, however, maintained its original characteristics and its own individual atmosphere. Fifty kilometres from Lisbon, in an easily accessible area, its beaches are very crowded during the summer, and are considered among the best in Europe for surfing. Ribeira d`Ilhas Beach, where one of the World Surfing Championship contests is held every year, is worth a special mention. A visit to Ericeira is also an excellent opportunity to try the shellfish and fresh fish dishes, the speciality of the regional cuisine.
Duration: 2 hours