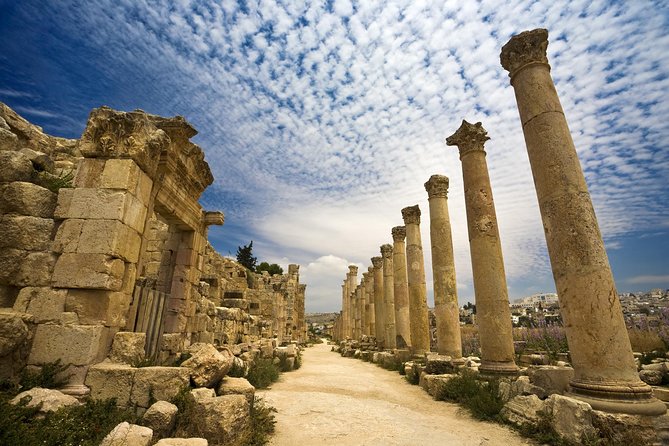 Jordan is blessed with some of Middle Easts best-preserved classical sites, and this 10-hour private trip from Amman covers three in one day. Explore Jerash, one of the worlds most impressive Roman archaeological sites. Tour the Greco-Roman ruins at Umm Qais; and visit Pella, where ancient relics intermingle with Roman monuments. Your trip includes private transportation, hotel pick up and drop off, entrance fees, and local guides to show you Jerash and Umm Qais.

Meet your private driver at your central Amman hotel and board your comfortable, air-conditioned vehicle. Then, start out on your full-day trip to Jerash and Umm Qais, home to the ruins of two of ancient Romes Decapolis cities a group of 10 situated on the frontiers of the Roman Empire in the Middle East. First, venture northward through Jordans green landscapes to Jerash, a modern city fringed by the relics of the once-prosperous Roman city known as Gerasa - Jerash. Meet your friendly local guide at the entrance, and enjoy a private tour of the spectacular site, one of the best-preserved Roman cities in the Middle East. Pass through the monumental Hadrians Arch that was the citys main gateway, and ogle the classic ruins spread before you. Then, stroll around this once-bustling city to see highlights such as the colonnaded avenue, the Temple of Zeus, the Hippodrome chariot-racing arena, and the Oval Plaza, an egg-shaped forum framed by a ring of standing columns. As you explore, hear captivating tales about Gerasa during its heyday. Learn how Alexander the Great conquered the city in the 2nd century B.C., and how later, local farmers cultivated much-coveted fruits and vegetables to sell on to the wealthy Roman residents. After free time to explore on your won, continue to the village of Umm Qais, overlooking the ruins of another Roman Decapolis city known as Gadara. Soak up the views from here over the Sea of Galilee and Golan Heights to explore the Greco-Roman ruins, including the amphitheater, crumbled mausoleum, basilica terrace, as well as other theaters and treasures. Then, visit the towns museum to admire some of the precious artifacts recovered from the site, including mosaics and marble statues.

Next, drive to Pella, the remains of a Hellenistic city, and earlier and later settlements. First mentioned as Pihilum or Pehel by the Egyptians in the 19th century B.C. Pella prospered when the Romans arrived, building temples, theaters, and baths. See the antiquities, some dating back more than 8,000 years. Journey back to Amman where your trip concludes with a hotel drop off.