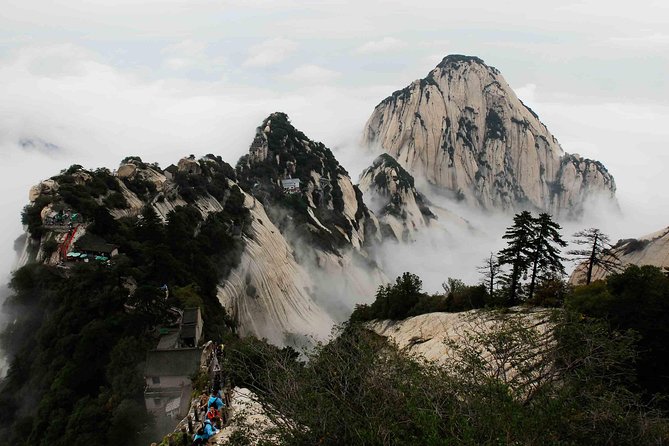 This is a full day 9-hour majestic mountain hiking tour with private guide and driver! Your private guide and driver will accompany you to Hua mountain from your hotel, and you will take the cable car up and down (at your own expense). Hiking times and difficulty levels are flexible!
The entrance ticket to the mountain, private English speaking tour guide, hotel pickup and drop off and all transportation are inclusive, but costsfor shuttle bus, lunch and cable car tickets are not included.
If your booking is"Tour+Foot Massage, 30 minutes enjoyable foot massage isincluded in the tour.
Please note: it takes more than30 minutes queue upbefore hiking for shuttle bus and cabel car.

Start your tour from early morning around 7:00am, and then enjoy the Chinese countryside during the two hour drive. Once you arrive at the Hua mountain ticket center, your guide will show you the hiking route options on the map, and then you will decide which way to go. There is a 20~30 minute shuttle bus journey to West Peak or North Peak Cable Car station based on your hiking route.

Four hiking route options with varied levels of difficulty (all cable car costs & shuttle bus costs are on your own):

Getting lost is not a problem, because all the trails are well marked in both Chinese and English.

Please note: Available lunch items are only drinks and snacks, such as farmer-style sweet potatoes or steamed sweet corn on the top of the mountain (at your own cost).

If your booking is "Tour+Foot Massage, you will enjoy 30 minutes Chinese style herbal foot massage after you finish your hiking.

At the end of tour, your private guide and driver will take you back to your city hotel.

Very little kids are not suitable to take this tour