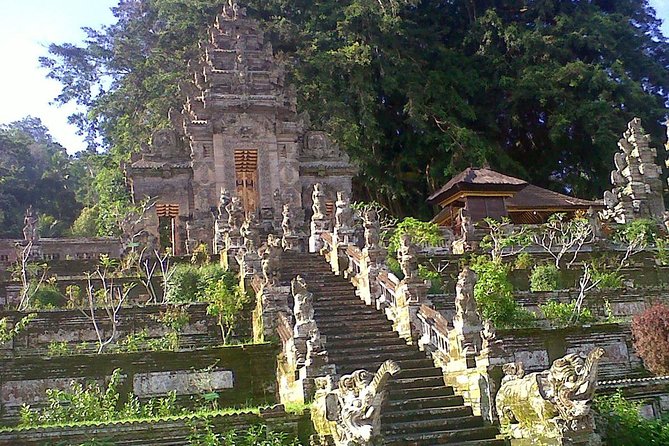 We will bring you to visit various very beautiful tourist objects in Bali
Kehen temple, Penglipuran village, Batur Volcano, Lunch, Bali Agrotourism Coffee plantation,tegalalang
Never missed the beauty of Bali nature has offer. Our friendly Bali Tour Driver always give the best service during the tour with ride the private car.
Visiting art village arount ubud,Visiting Batu Bulan village, the central of batik, and afterward visiting Celuk village, the center of gold and silver crafts, and visit Mas Village, a sculpture center and then visiting the Ubud village, the center of craft painting.
Visiting coffee, chocolate and spice plantations and while drinking coffee and ginger tea, while enjoying a natural village atmosphere, it's free
If there is a place that you do not want to visit, immediately talk with the driver to continue the next trip. the satisfaction and comfort of your trip is our goal
Make this activity tour your choice. You will get an unforgettable personal experience.

Itinerary
This is a typical itinerary for this product
Stop At: Celuk Village, Jalan Raya Celuk, Sukawati 80582 Indonesia
The second destination is Celuk Village, a center for handicrafts made of silver and gold.
The village of batik craftsmen, Batubulan Village, is the third destination that you must enjoy.
After touching batik with your own hands, we will take you to touch other Balinese crafts in the form of statues and
paintings in Mas Village.
Duration: 1 hour
Stop At: Kehen Temple, Jl. Raya Bangli North part of Bangli City, Kintamani 80513 Indonesia
Kehen is a Balinese Hindu temple located in Cempaga, Bangli Regency, Bali. The temple is set on the foot of a wooded hill, about 2 kilometres (1.2 mi) north of the town center. Established at least in the 13th-century, Pura Kehen was the royal temple of the Bangli Kingdom, now the Regency of Bangli.
Duration: 30 minutes
Stop At: Penglipuran Village, Jl. Penglipuran, Kubu, Kec. Bangli, Kabupaten Bangli, Bali 80661, Indonesia
Penglipuran Village is one of the traditional villages that located in Bangli Regency, Bali Province, Indonesia. Penglipuran village is famous as one of the tourist destinations in Bali because of its society who still preserve their traditional culture in their daily lives. The architecture of buildings and land processing still follows the concept of Tri Hita Karana, the philosophy of Balinese society regarding the balance of relations between God, humans and their environment. Penglipuran Village succeeded in building tourism that benefited all of their communities without losing their culture and traditions. In 1995, Penglipuran Village also received a Kalpataru award from the Indonesian Government for its efforts to protect the Bamboo Forest in their local ecosystem.
Duration: 30 minutes
Stop At: Kintamani Highland, Jl. Raya Penelokan, Batur, Bangli, Kintamani 80518 Indonesia
You must be hungry after visiting these villages.We will take you to lunch at Kintamani while enjoying the
beautiful scenery of Mount Batur and Lake Batur.
Duration: 1 hour
Stop At: Satria Coffee Plantation, Ubud Indonesia
After finishing lunch, let;s go to agro-tourism while drinking ginger tea, chocolate, Balinese coffee, for free!
Duration: 30 minutes
Stop At: Tegalalang Rice Terrace, Jalan Raya Ceking, Tegalalang 80517 Indonesia
The Tegalalang Rice Terraces is one of the main things to do in Ubud. This valley of rice paddies, located north of Ubud has some jaw-dropping views and is a great area to wander around. Explore all the different levels, have a swing, and of course a lot of photos. Tegalalang is an easy 20-minute drive from Ubud and is something you must do in Bali.
Duration: 20 minutes

Pick up time 8 am