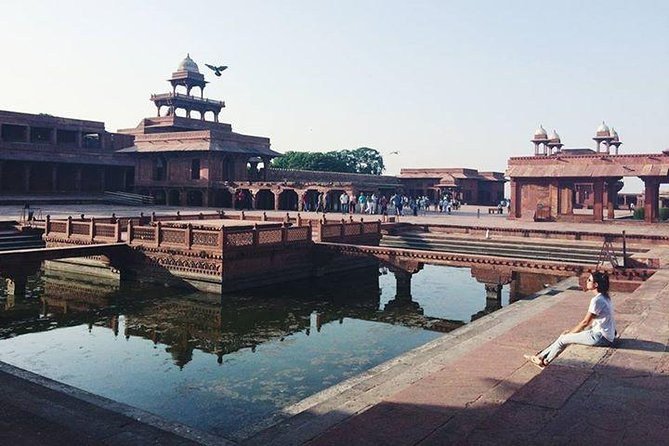 On this 14-hour trip, you will leave early in the morning from Jaipur, and see two beautiful and mysterious UNESCO sites, Fatehpur Sikri and Agra Fort. Along the way to Agra is the world-famous Taj Mahal. You will have the option to shop for goods while in Agra, and will get to appreciate the work of the locals. You can enjoy anincluded lunch at a local restaurant as well.

Your 4-hour journey to Agra begins after a 6am pickup from your hotel, airport or accommodations in Jaipur.

The UNESCO World Heritage Site of Fatehpur Sikri is approximately 1-hour from Agra. It has been described as the worlds most perfectly preserved ghost town," you'll have the option to learn about this ghost town from your guide. Built by Akbar in the late 16th century, it was abandoned after only 14 years, and the elegant buildings of this superb walled city remain intact to this day.

Visit the Taj Mahal, another UNESCO World Heritage Site. No trip to Agra would be complete without a visit to this shimmering display of domes and minarets. The world's best-known tomb stands testimony to the timeless love story of the 17th century Mughal Emperor, Shah Jahan and his wife, Queen Mumtaz Mahal. After this visit, have lunch, which will be provided at a local restaurant. (note: the Taj Mahal is closed on Fridays)

Visit yet another UNESCO World Heritage Site, the imposing Agra Fort, built by Emperor Akbar in 1565 A.D. This huge fort is made of red sandstone, and its interior reflects an interesting synthesis of Hindu and Central Asian architectural styles.

Enjoy some shopping in Agra, known for its fabulous handicrafts made of marble and soft-stone inlay work. The Mughals were great patrons of arts and crafts. Empress Nur Jahan took personal interest and was an accomplished artist herself in zari embroidery work. Agra's major handicraft products also include leatherware, brassware, carpets, jewellery and embroidery work.

After a memorable day you will be driven back to Jaipur, arriving back at your hotel, or airport in Jaipur at approximately 9pm.