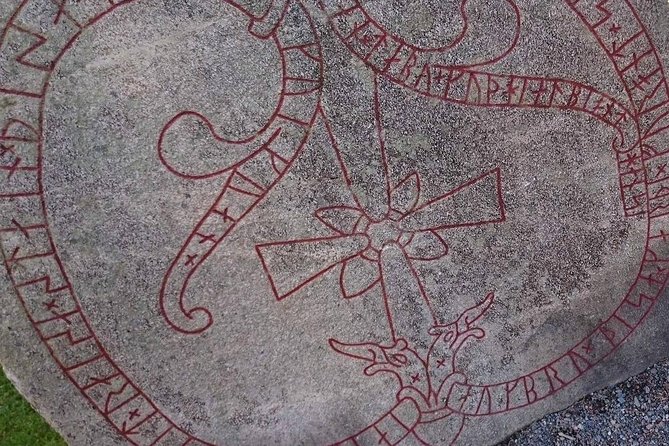 Uncover a great amount of Viking history on this 8-hour tour from Stockholm into the lovely Swedish countryside. Venture in the company of aexpert local/regional history guide and get to know the Viking Swedes. Go to Sigtuna, the oldest still existing town in Sweden and walk by the 18th-century traditional wooden houses on the main street that still have its original Viking age stretch, travel back in time. Hear tales on Viking mythology and sagas. Another amazing highlight of this tour is the Old Uppsala burial mounds who are more than 50 meters/150 feet wide! Also see the Uppsala Cathedral, the biggest church in the Nordic countries! Transportation from and back to your hotel is included.

Travel in the morning from your hotel or cruise port in a comfortable car or minivan depending on the group size. Go north to the beautiful Swedish countryside and sense how you start to move back in time.

Head to the Runic Kingdom, a Viking history attraction area north of Stockholm. It is filled with Viking remnants and we will visit the best.
We will visit a Viking assembly and sense the presence of ancient power, imagine Viking lords sitting in at the sight making important decisions. Seethe iconic Jarlabanki's bridge, and listen to the intriguing tale of Lord Jarlabanke. Visit the gravefield at Broby, one of the most excavated grave-sites in Sweden. Hear about Estrid, one of the most famous Viking women in the Stockholm county area. Get to knowhow the Vikings buried their dead.

Go toSigtuna. Experience the history of Sweden's oldest town and enjoy the guide's passion for Sigtuna. Walk among church ruins, walk on the main Viking-age street on a guided tour. You will see beautiful houses from the 1700's and you can take a stroll on your own-time to the shores of Lake Mlaren, the third largest lake in Sweden.

GoOld and New Uppsala. In the Old Uppsala you will visit the great mounds who remains from 500/600 AD when the site was a mighty power center. Here, the Swedes had assembly meetings, gatherings and sacrifices! The new Uppsala is a thriving university city, experience the great cathedral who is the biggest church in the Nordic countries!

Be taken back to your central Stockholm accommodations or cruise port at tour's end.

All taxes and surcharges

A taste of Viking inspired mead