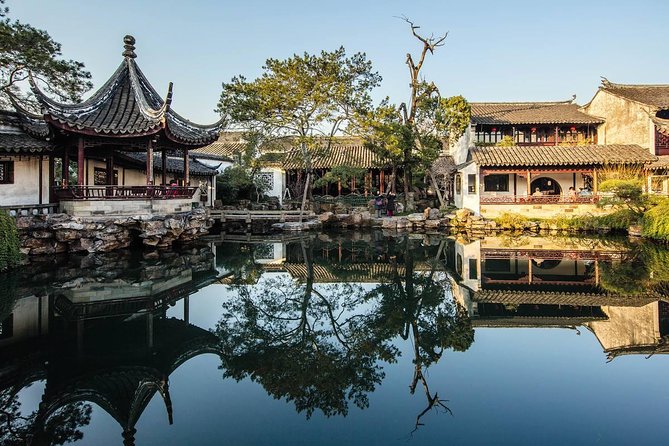 Suzhou, the garden of City, is famous for Chinese classic gardens. This Garden Exploration Day Tour will give you unique tour experience to tour Chinese gardens in one day. Explore the most famous as well as the largest garden in Suzhou--Humble Administrators Garden, appreciate the architectural splendor of Master of Nets Garden. Visit Ouyuan garden to feel the tranquil beauty and special elements for gardens. Continue to visit Canglang Pavilion, the oldest garden in Suzhou. You also have a chance to see how the silk made into fabric, products in Suzhou No.1 Silk Mill.

Meet your private guide upon pickup at the Suzhou railway station or your hotel lobby in Suzhou. Set out on a full day of sightseeing in the comfort of an air-conditioned private vehicle, and talk with your guide about any particular interests you have so the commentary and itinerary can be customized.

Your tour starts withThe Humble Administrators Garden, it isthe largest private garden in Suzhou, which was listed as one of the four most famous national classic gardens together with the Summer Palace, Mountain Summer Resort in Chengde and Lingering Garden of Suzhou. The art of the Humble Administrator's Garden has a prominent position in the history of China's garden creation. It represents the historical characteristics and achievements of south-east China's private gardens.

Next you will visitThe Master of Nets Garden, whichis the smallest of the Suzhou residential gardens, but it is the most impressive because of its use of space which creates the illusion of an area that is much greater than its actual size. This UNESCO World Heritage Site boasts an impressive garden and nightly Kunqu opera performances, but its best known for its architectural splendor. The garden is especially fancied by overseas visitors and is praised as the most ornate and intact private gardens in Suzhou.

After lunch, move toOuyuan, also refer toCouple's Retreat Garden. It is a UNESCO World Heritage Site and a key cultural relic under state protection. This garden despite its narrow width features an artificial hill made from rock brought from Taihu Lake. Different from other Suzhou garden, the layout of the Couple's Retreat Garden is designed purposely. Not only it is a representation of Suzhou garden, but also it has its unique elements which is rooted in profound and broad Chinese culture.

Continue your tour to Canglang Pavilion, another UNESCO World Heritage Site it variously translated as Surging Wave Pavilion. It is the oldest among the existing classical gardens in Suzhou and also one of the four most famous gardens in the city -- the others being the Shizilin (Lion Grove), Zhuozhengyuan (Humble Administrator's Garden) and Liuyuan (Lingering Garden).

The last stop isSuzhou No. 1 Silk Mill.Suzhouhas a long and rich history of silk culture, including mulberry tree and silk worm cultivation and turning raw silk into beautiful fabric. The Suzhou No. 1 Silk Mill has been a proud steward of this heritage for over 80 years. It's more like a museum which shows you how the silk is made from cocoons from the beginning and the whole silk process. Not to be missed.

After the tour, drive you back to your hotel or Suzhou train station and the tour ends.