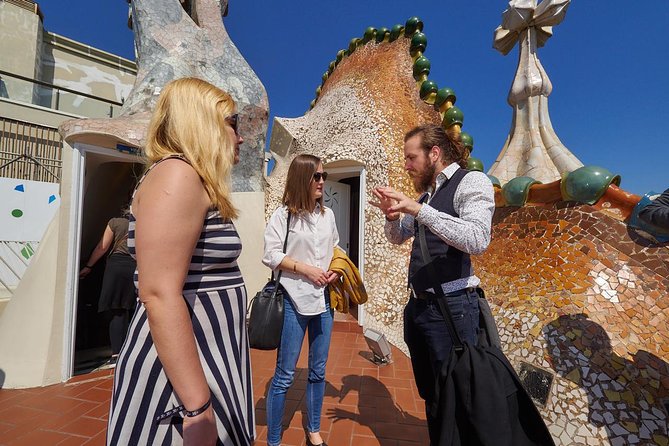 Tour the masterworks of Antoni Gaudi, Barcelona's famous modernista architect, in a private tour6 people maxled by a local architect or historian and equipped with skip-the-line tickets for Casa Mila. Visit Casa Battlo, Casa Mila, and the Block of Discord, and get an immersive background on this important figure in Catalan art history.

During this three hour tour through the heart of Barcelona, well introduce the fantastic architecture of Antoni Gaud, Barcelonas most important architect, and situate his work within the context of Catalan society at the time. Besides visiting some of Gauds most important works, well look broadly at how Barcelona expanded in the late 19th and early 20th century and became a breeding ground for the modernist movement and, eventually, such luminaries as Miro and Picasso.

Well begin by looking at the history of Barcelona and the growth of the city, introducing the urban planner Ildefons Cerda whose enlargement (example in Catalan) in 1859 laid out the modern city, much as Baron von Haussman did for Paris some years later. With this architectural context as a backdrop, well make our way through the heart of the city to see two of Gaud's masterpieces: the Casa Batll on the Block of Discord, and Casa Mil. We will spend concerted time inside of Casa Batll and on its famous roof, picking our way through the thorough Gaud museum inside.
During the course of this walk well also look at the works of some of Gauds followers and rivals, including buildings by Puig i Cadafalch. Although few of these artists are known outside of Barcelona, their work had a significant influence on Gaud and represent the artistic context he was working within.

As we move through the physical city, through history, and through the aesthetic evolution of Barcelona well look at how Gaud's buildings fight against the modern grid and try to neutralize it in a fantastical way that borders on the absurd. Well learn to see his work in a new light and contextualize it within the history of the city.