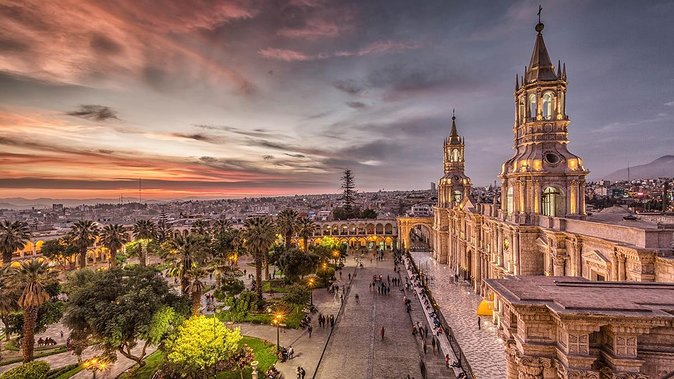 An unforgettable day to visit the Monastery of Santa Catalina, which is a sampler of four centuries of Arequipa architecture, It was built in 1579 and was enlarged in the 17th century. The over 20,000-square-meter monastery was built predominantly in theMudjarstyle, and is characterized by its vividly painted walls. There are approximately 20 nuns currently living in the northern corner of the complex; the rest of the monastery is open to the public. The small streets and cloisters full of colorful flowers and the walls painted in fresh tints. The narrow alleys leading to the various parts of the convent going through picturesque sites and places of living and sleeping with the original furniture. Visitors will relive and lost time on the road.

Visit the main square, one of the most beautiful of Peru, The Cathedral of Arequipa, was built in sillar (stone of volcanic origin), with brick vaults; It is the main church of the city that occupies the entire north side of the Plaza de armas. Built entirely in ashlar, it exhibits a neo-Renaissance style with a certain Gothic influence. Its facade is constituted by seventy columns with Corinthian capitals, the Jesuit Church of the Company, which in its beautiful facade announces the called mestizo architecture, cloisters and dome.

Visit the San Camilo market is located in the Historic Center of Arequipa, founded in 1881, The viewpoint of Yanahuara, a group of beautiful sillar arches built during the 19th century, due to the location in which it is located, is a must-see, as it allows you to admire the beautiful white city of Arequipa, having a panoramic view of its three volcanoes (the Misti, Chachani, and the Pichu Pichu).

Mirador de Sachaca, This viewpoint, 19 meters high, was built in 1988 on a hill that housed an old cemetery. Materials such as wood and iron were used; and it was remodeled in 1996 in an area of 29 square meters. For this purpose, U-shaped structural plates were used, which were embedded in pure rock and ashlar plating.

Once finishing this tour of approximately 6 hours, finally climb on our private transport to return to the city and leave it at your proper hotel or place.

Social distancing enforced at least 1 meter. Health reasons & Confidence. We don't perform Temperature checks for travelers upon arrival. Our Servers pass a quick test to rule out Covid-19. Use of masks will be mandatory until the government of Peru authorizes the end of its use.