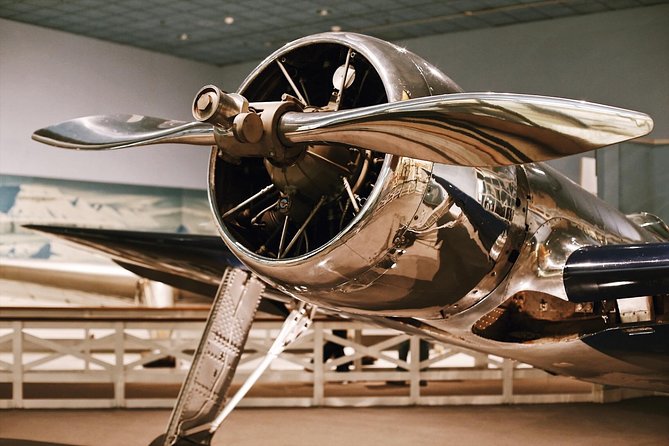 The 2 hour exclusive guided museum tour will introduce you to the history of flight in the United States that eventually landed a man on the moon. Take one giant leap into the unique collection at the National Air and Space Museum, covering the United States world famous space program.

The National air and space museum doesnt just cover extraterrestrial exploration. It covers everything from the early history of flight to the Space Race and moon landings. Youll see the first plane to take flight as well as the Spirit of St. Louis, the first plane to cross the Atlantic. Discuss Amelia Earhart, the iconic female pilot who famously disappeared while trying to fly around the world. Check out Hubble space suits, and lunar modules while learning all about NASA and the United States space program. The two story back ups for the Hubble telescope and the early space station Skylab dominate your field of vision and since the originals stayed in space, this is the best way to get up close and personal! Find out what it's like to be an astronaut today with one of our expert guides theres even freeze dried ice cream in the gift shop to get the full experience. Discover the history of the worlds foremost space program and the technology and innovation that made it possible to land a man on the moon.

The capital of the United States, the playground of politicians and presidents, is just as enticing for tourists who want to experience a slice of American history. Our English speaking guides organize private and small group tours to the citys most important institutions, like the National museum of american history and the Air and Space Museum. Rub elbows with senators as you stroll the historical monuments on the Mall and learn about the iconic figures buried at Arlington national cemetery. At Babylon Tours, our engaging guides want to make it clear that D.C. isnt just for the fat cats on Capitol hill its also yours to explore.

Tour Guide Exclusively For You (Does NOT apply if you choose "SAVE! BOOK SEMI-PRIVATE" option)

Wheelchair Friendly (Does NOT apply if you choose "SAVE! BOOK SEMI-PRIVATE" option)

Tour price does NOT include gratuities (optional)

Notes: (PLEASE NOTE: The Air & Space museum is currently under massive construction and will remain as such for multiple years. This means that Many of the exhibits we describe may NOT be on display. We adjust our tour based on the changing stages of this renovation, and the exhibits that are available to us. here is a link for there website if you would like an updated list of what you may see during your visit: https://airandspace.si.edu/exhibitions/now-view Thank you for understanding.) Appropriate dress is required for entry into some sites on this tour. No large bags or suitcases are allowed inside the museum, only handbags or small thin bag packs are allowed through security. Due to increased security measures at many attractions some lines may form on tours with 'Skip the Line' or 'No Wait' access. Some specific rooms inside the museum are subjected to a very quiet or restricted right to speak inside, in this cases your guide will provide the information about this places before entering the specific rooms where this rule applies. Some collections may vary along the year.