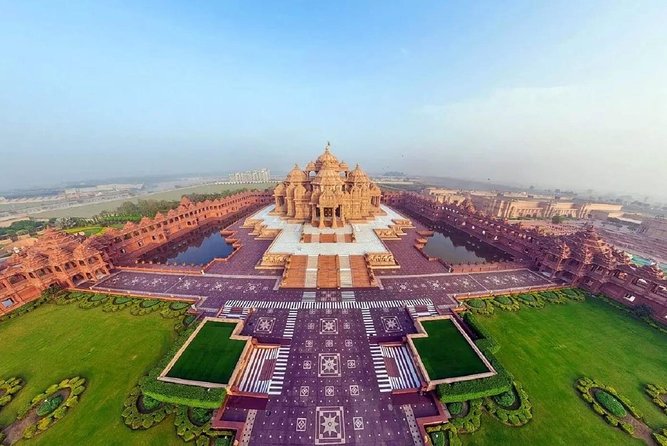 Explore the largest city in the former capital of the Gujarat State on this private tour of Ahmedabad. Follow your expert guide through the sites, landmarks and memorials as you make your way through this destination that was built in 1411 A.D. Make stops at Jama masjid, the Sidi Saiyeds Mosque, Akshardham temple, the Adalaj Stepwell, and many more. Its the perfect way to see the best of this top attraction.You will be greeted by your guide in Ahmedabad hotel at 9:00am and start your tour with a visit to the Masjid-i Jahan-Numa, commonly known as Jama masjid of Delhi. The Jama Masjid of Delhi is the largest mosque in India and was built by Mughal emperor Shah Jahan between 1644 -1656 on 1 million rupees. It was inaugurated by imam from Bukhara (Uzbekistan in present day)

Itinerary
This is a typical itinerary for this product
Stop At: Sarkhej Jama Masjid , Post Jeevraj Park, Makarba, Ahmedabad, Gujarat 380051, India
Jama Masjid, also known as Jumah Mosque, is a mosque in Ahmedabad, built in 1424 during the reign of Ahmed Shah I. Lying in the old walled city, the mosque is situated outside Bhadra Fort area, along the south side of the road extending from Teen Darwaza to Manek Chowk.
Duration: 40 minutes
Stop At: Sidi Saiyyed Mosque, Bhadra Rd Opposite Electricity House, Gheekanta, Lal Darwaja, Ahmedabad 380001 India
The Sidi Saiyyed Mosque, popularly known as Sidi Saiyyid ni Jali locally, built in 1572-73 AD, is one of the most famous mosques of Ahmedabad, Gujarat, India.
Duration: 40 minutes
Stop At: Akshardham Temple, 'J' Road, Sector 20 Gandhinagar, Ahmedabad 3820202 India
Swaminarayan Akshardham in Gandhinagar, Gujarat is a large Hindu temple complex inspired by Yogiji maharaj the fourth spiritual successor of Lord Swaminarayan according to the denomination of Swaminarayan
Duration: 40 minutes
Stop At: Adalaj Step-well, Adalaj District-Gandhinagar, Ahmedabad India
Adalaj Stepwell or Rudabai Stepwell is a stepwell located in the village of Adalaj, close to Ahmedabad city and in Gandhinagar district in the Indian state of Gujarat. It was built in 1498 in the memory of Rana Veer Singh, by his wife Queen Rudadevi. It is a fine example of Indian architecture work.
Duration: 40 minutes