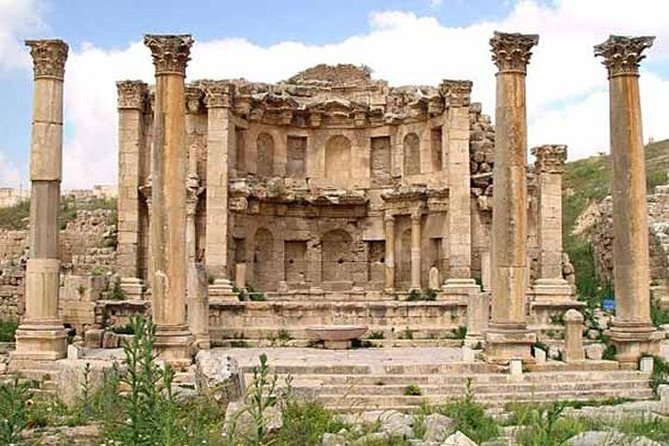 Witness the classical antiquities of Amman and Jerash on this 6-hour private tour. Traveling between the sites by air-conditioned vehicle, take guided tours of the sun-burnished ancient ruins of Amman Citadel and see the citys stellar Roman Amphitheater, a 6,000-seater stadium from the 2nd century. Then, drive to the spectacular ruins of Jerash, one of the Middle Easts best-preserved Roman cities. Stroll around the semi-crumbled temples, fountains, column-ringed Oval Plaza and, other relics as your guide tells fascinating stories of the city, once a prosperous outpost of the Roman Empire.

Begin your 6-hour private tour with a pick up from your central Amman hotel, and travel by comfortable, air-conditioned vehicle to the hilltop Citadel that rises up over the Jordanian capital. On route, hear interesting facts behind this rock-top collection of Roman, Byzantine and early Islamic ruins and head inside to explore. See the stunning Roman temple, colonnaded streets and other relics as a guide unravels the history of each monument. Continue to Ammans spectacular, 2nd-century Roman Amphitheater, once part of the ancient city of Philadelphia that once stood on the site of todays modern capital. Admire the scale and symmetry of the stunning, 6,000-seater arena, and hear from your guide how it was built to face north to shelter spectators from the fiercest heat of the sun. Having explored here, sit back and relax as you leave Amman and drive to the archaeological ruins at Jerash. Soak up the views of the passing towns and desert landscapes, and along the way, hear the history of Jerash. Largely established by Alexander the Great in the 2nd century BC, this ancient city was one of the most prosperous in the Roman Empire, and was covered by sand for centuries until its remnants were discovered in 1806. Head through the ancient city gate and walk around the well-preserved ruins as your guide tells you tales about the city in its heyday. See its arches, theaters and elegant colonnaded street and snap photos of the stunning Oval Plaza, the intriguing egg-shaped public square framed by standing columns. After your walking tour, return to Amman where your experience finishes with a drop-off at your hotel.