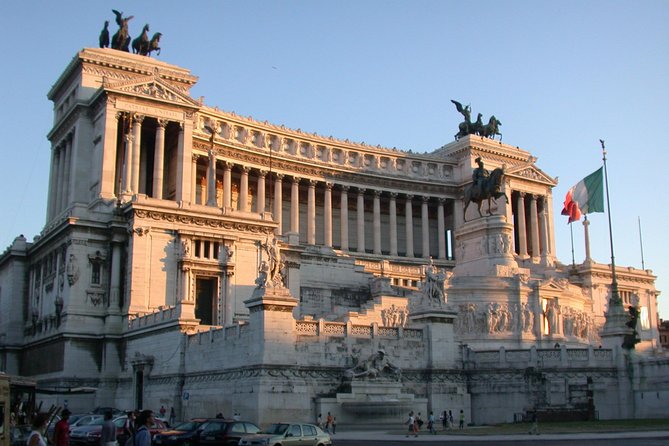 Your driver will meet you at your centrally-located accommodation in Rome in the morning to start your tour of the city. During the tour, your driver will be able to give you basic informations about the sites you're going to visit, but will not be able to leave the vehicle to enter the sites with you.

The tour will include drive-by picture stops and short visits to the following attractions:

Free time for lunch where the driver can suggest a nice caf, restaurant or pizzeria within your desired budget.
After lunch, you will proceed to:  You may choose to upgrade your tour by adding a licensed local guide.

A private licensed guide (if booked) will join you and your driver during the tour. The guide will be able to give you detailed information about every site you'll visit, from both inside the car and walking outside with you. The guide will be allowed to leave the vehicle with you when you visit the attractions.

There are so many amazing things to see in Rome, extra hours could help you to cover more. Some suggested Itineraries are below but, because this is a private tour, they can be adjusted or modified to fit your needs.

At the end of the tour your driver will take you back to your accommodation in Rome.

Transport by Mercedes or other similar private vehicle

Our English-speaking Driver will give a general overview regarding the history of the areas in the car before you start walking around on your own. He will allow all the time you need to visit with No Rushing as in group tours. By Italian law he is unable to conduct guiding inside museums, monuments, etc, or even to leave the car to walk around with you.

Official Licensed Guides, if booked, are selected by us

For all Customers under 18 years old booked for this tour, please provide the passports in original or scanned copy or Picture in Smartphone/Tablet as proof of identity for the benefit reductions of the tour

Please note: in high season (April thru October) you must book the tour option with guide included a minimum of 30 days in advance