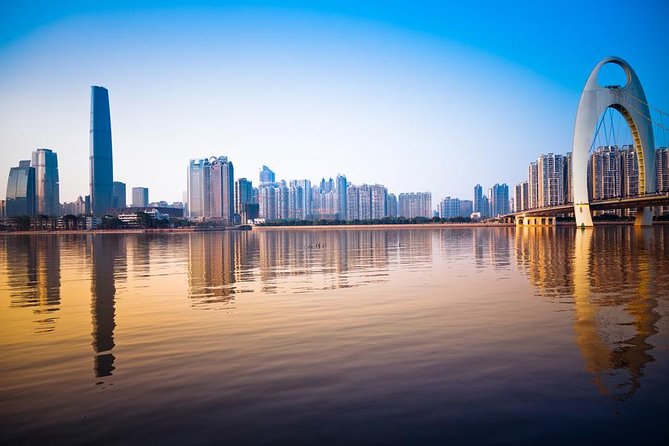 Get to know the historical city of Guangzhou on this exciting sightseeing tour by comfortable vehicle and on foot. This private full-day tour with a friendly local guide is a great introduction to the former city of Canton. Youll visit numerous cultural attractions and historical landmarks such as the Chen Clan Temple and its Guangdong Folk Art Museum, the Mausoleum of the Nanyue King and Six Banyan Temple. Your tour includes a visit to Shamian Island and a Chinese-style lunch.

Your friendly local guide will meet you in the lobby of your Guangzhou hotel and drive you by private vehicle to several top attractions in the city. Along the way, hear informative commentary as you stop to explore the famous cultural and historical landmarks.

First, head to Chen Clan Temple, built in the 1890s for ancestral worship by the Chen family. Also called Chen Family Academy, the building was once used by students in preparation for their imperial exams. Inside, admire the wood, brick and ivory carvings, and the elaborate design of the interior beams, ridges, walls and columns.

Currently housing the Guangdong Folk Art Museum, the landmark features exhibits from all regions of Guangdong Province. Your guide will point out the outstanding Cantonese craftsmanship in traditional embroidery and Chinese ink designs as well as rare print arts and ceramics.

Next, stop at the Mausoleum of the Nanyue King to view the Nanyue Royal Tomb, which dates back 2,000 years to the Han Dynasty. Situated on Xianggang Hill, the slope descends 20 meters to the underground tomb, divided into seven separate chambers and filled with more than 1,000 burial artifacts including bone, ash, clothing and arrow tips.

Step back in time and discover the secrets of the tomb with your guide. Within the (100 square-meter) complex, view the wall painting and a number of cultural relics, including King Zhao Mos burial garment. Made of more than 2,000 pieces of jade connected by silk thread, its the only one of its kind in the world!

Admire the colorful exterior carvings of the 184-foot Flower Pagoda, which has 17 interior levels although it appears to have only nine from the outside. Your guide will tell you about the decorative copper pillar at the top of the tower, cast during the Yuan Dynasty (1271-1368),

From here, your guide will drive you to Shamian island, an oval islet situated on the north bank of the Pearl Rivers White Goose Pool. The historical buildings of this quiet island showcase British and French influences on its neoclassical architecture. Designated a key protected relic of the state, Shamian island is referred to as the Ninth Sight of Guangzhou.

When you complete your private tour, your guide will transport you back to your Guangzhou hotel.

Adult pricing applies to all travelers; infants can join free of charge