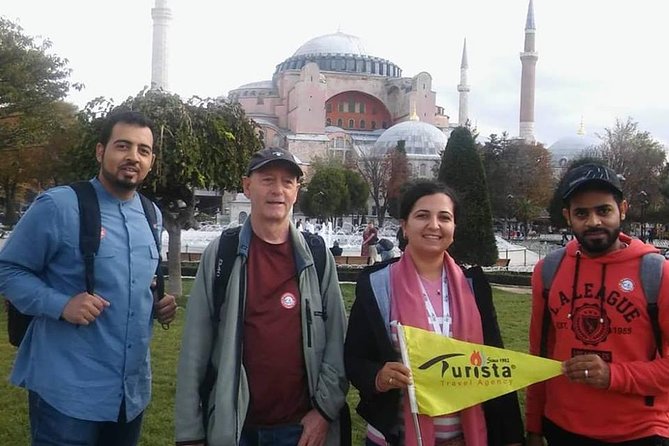 We pick-up from your hotel at around 09:00 for full day walking old city tour, prepare yourself to be charmed with history and architecture of the breathtaking city, Istanbul. You will be amazed with the most famous historic monuments and sights in Old City area. These are 1500 year old Hagia Sophia Museum, Gigantic Blue mosque with its famous blue tiles, Hippodrome area where the Byzantium era chariot races used to be once held, Caferaga Medresesi, a foundation for serving Turkish Culture, that organizes various workshops about handicrafts and music, Topkapi palace one of the largest palaces in Istanbul which was the primary residence of the Ottoman Sultans for approximately 400 years and Grand Bazaar which is the worlds oldest indoor market. After the tour you will be dropped off at your hotel at around 17:00.

First stop is Hippodrome area where chariot races were held and also the center of Byzantium life for 1,000 years and of Ottoman life for another 400 years. It has been the scene of countless political dramas. Today it is a square named Sultanahmet Meydan, with a few fragments of the original structure surviving like Serpent column, Obelisk of Thutmose III and Walled obelisk.

Continue to The blue mosque with six minarets, built at the bequest of Sultan Ahmet I and one of the best preserved and most significant examples of Ottoman architecture. The mosque is popularly known as the Blue mosque for the blue tiles adorning the walls of its interior. It was built from 1609 to 1616, during the rule of Ahmed I. Its Klliye contains a tomb of the founder, a madrasah and a hospice. The Sultan ahmed mosque is still popularly used as a mosque.
Our next stop is the Hagia sophia which is a UNESCO-listed museum that contains Ottoman and Byzantine works. It is a former Christian patriarchal basilica (church), later an imperial mosque, and now a museum in Istanbul, Turkey. From the date of its construction in 537 until 1453, it served as an Orthodox cathedral and seat of the Patriarch of Constantinople, except between 1204 and 1261, when it was converted to a Roman Catholic cathedral under the Latin Empire. The building was a mosque from 29 May 1453 until 1931. It was then secularized and opened as a museum on 1 February 1935. Listen to the history and examine the architectural displays with your professional guide.

Stop by Caferaga Medresesi, a foundation for serving Turkish Culture, that organizes various workshops about handicrafts and music. The medrese, listed within the independent medreses and having had a number of restorations until today, was transformed by the Turkish Cultural Service Foundation in 1989 into a tourist center with 15 classrooms/exhibition rooms, a big saloon and a garden where traditional Turkish handcrafts such as calligraphy, ceramics, jewelry and so forth are taught, made and sold.

After have a little break for lunch in a kebab restaurant, continue to Topkapi palace. It is the largest palace in Istanbul and was also the primary residence of the Ottoman sultans for approximately 400 years. The palace complex consists of four main courtyards and many smaller buildings. At its peak, the palace was home to as many as 4,000 people, and covered a large area with a long shoreline. It contained mosques, a hospital, bakeries, and even a mint.

Our last stop is the Grand bazaar, one of the most famous bazaars around the world. Discover the worlds oldest indoor market with its 61 covered streets and over 3,000 shops. It is filled with jewelry, leather, spice and lots of interesting craft shops. In 2014, It is listed No.1 among world's most-visited tourist attractions with 91,250,000 annual visitors.

A moderate amount of walking is involved, not recommended for participants with walking difficulties.

Topkapi Palace is closed on Tuesdays, will be replaced with Basilica Cistern.

St. Sophia is closed on Mondays 30 October to 01 April winter period. Will be replaced with the Underground Cistern.

Grand Bazaar is closed on Sundays.

During religious holidays, some of the attractions are closed.