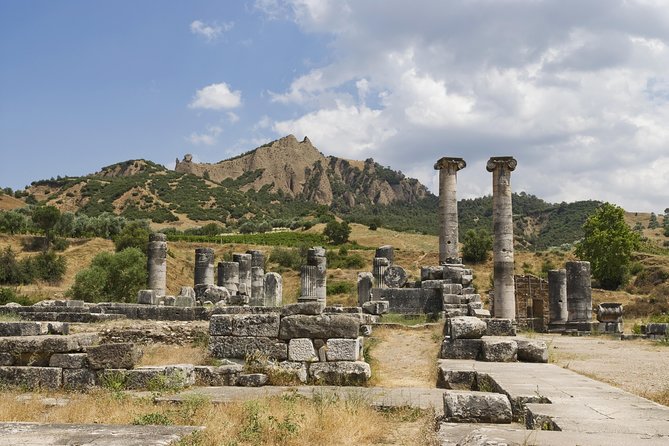 Combine a visit to the ancient ruins of Sardis with a tour of Izmir's Jewish neighborhoods on a full-day excursion from Kusadasi-turkey">Kusadasi! While enjoying personalized attention from a private guide, walk around the medley of ruins at Sardis and learn about the Lycians, Persians and Romans who made the city their home. Travel north to Izmir in the afternoon, and discover the synagogues and quirky landmarks around the Jewish neighborhoods of Karata and Kemeralt. This private day trip can finish with an airport drop-off in Izmir, or continue back to Kusadasi.

Start your day trip with a hotel pickup from central Kusadasi, and travel north to Seluk, a town thats known as the gateway to the Classical city of Ephesus. Seluk has its fair share of monuments, too, and your private guide will point out some of its highlights as you travel through town.

Around late morning, arrive in the village of Sartmustafa, home to the incredible ruins of ancient Sardis. The former capital of the Lycian kingdom, Sardis was subsequently lived in by both the Persians and Romans, and all civilizations left their mark on the city. Today, beautifully preserved ancient temples sit cheek-by-jowl with Byzantine architecture, displaying the glory of Sardis historical heydays.

Follow your guide around the Temple of Cybele and Temple of Diana, hearing stories of the gods for whom the monuments were built, and gaze at the River Pactolus that flows majestically through the town. Amble along the Persian-built 'royal road,' and then head inside the impressive Sardis Synagogue to swoon over its reconstructed interior.

Take a break for lunch in town, and then continue your journey north to Izmir. After roughly 2 hours on the road, arrive in the citys Karata neighborhood, aka the Old Jewish Quarter. Stretch your legs on a stroll along pretty Dario Moreno Street, and visit the Asansr, a quirky elevator built to facilitate trade between Karata and a neighborhood further up the hill.

Relax on a drive through Kemeralt district and look out for the tiny synagogues of Havra Street that once served the communitys Jewish merchants and artists. After hearing more tales of Izmirs rich Jewish history, make your way out of the city and travel back toward Kusadasi. Your tour then finishes with a drop-off at your Kusadasi hotel or at Izmir International Airport, if you prefer.

Confirmation for this tour will be received within 48 hours, subject to availability