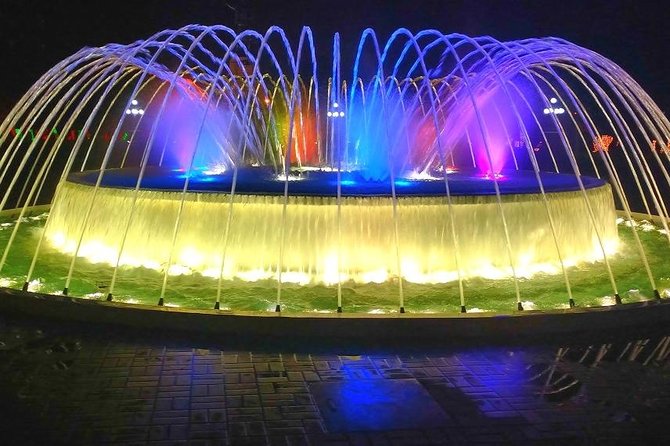 Discover Lima by night and visit some of the best evening attractions the City of Kings has to offer. Don't miss out on the famous Magic water circuit, Lima's main squares and churches and its well-known parks. A full evening out that you won't soon forget!

Embark on a nighttime city tour whereby you can briefly get to know the attractions of the Historical Center of Lima and Miraflores.

In Miraflores, we will visit from the outside, the Huaca pucllana monument built on mud and known for being one of the ceremonial centers of Lima culture. The modern area of this district includes the visit to Miraflores Park (Parque kennedy), the Malecn Cisneros and Parque del Amor, which, visited by many couples, you are sure to feel a very romantic and cozy sensation when overlooking the sea. We will have a final tour to the main Mall of Miraflores called Larcomar, the biggest of the district that has the most exclusive shops in Lima.

Once downtown, we will visit the Main square of lima, the Cathedral that has a Renaissance style facade and various chapels such as the Sagrada Familia and La Inmaculada Concepcin. In addition, around the square we will see the Government Palace, the Municipal Palace, the Archbishop's Palace and the Union Club. Later, we visit the convent of San Francisco, which houses much of the colonial art of Lima and the Plaza San Martn declared cultural heritage of humanity in 1988.

Then, ride by the Park of the Exposition and the Park of the Reserve. Here, we will visit the Water Magical Circuit, which has an interesting fountains complex that release jets of water up to 80 meters high. The fountains, which have different forms and sizes, show a mix of music, light, color and even images that strongly attract the attention. It has a World Record Guinness for being the biggest complex of water fountains of the world in a public park.

Hotel pickup and drop off.

Snack and drink on board

Pick up/Drop off from Lima Airport or Callao Port ($15.00 extra per person)