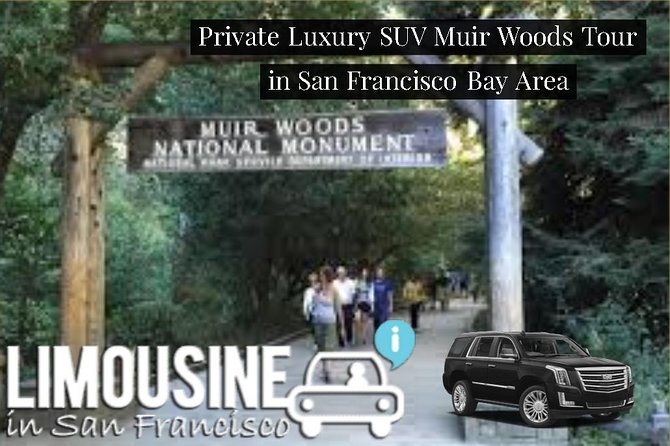 Let our professional chauffeur wheel you and your friends in a Luxury SUV through the Marin headlands, a into a magical Redwood forest known as Muir woods. Did you know that at Muir woods are the tallest trees in the world? These magnificent trees are found only at Northern California coast.
On our tour to Muir woods, our guide will explain everything you would like to know about this giant redwood forest. You will have the opportunity to walk among these beautiful Sequoia trees, by following the creek bed or climb high into the hills.

Itinerary
This is a typical itinerary for this product
Stop At: Muir Woods National Monument, 1 Muir Woods Rd, Mill Valley, CA 94941-4205
Limousine in San Francisoc will drive you through the Marin Headlands to a magical Redwood forest known as Muir Woods.
Duration: 2 hours

Please provide your pickup location when you book