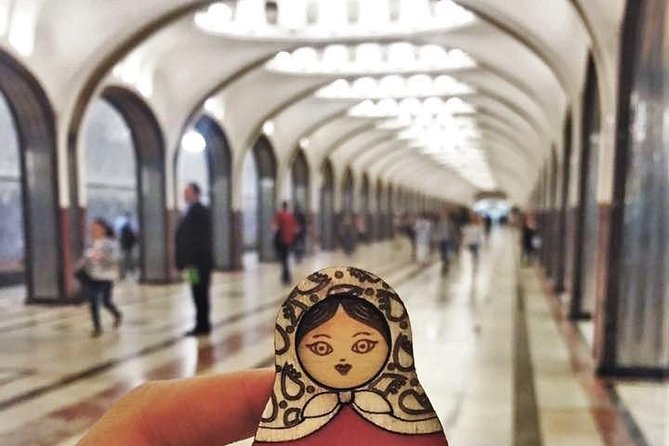 Take aprivate Moscow Metro Tourto see the most historical metro stations, learn fun facts and fascinating stories and feel like a local in the most beautiful Metro in the world. Metro pass is included in the price of the tour.
See 10 stations on 2-hour tour or 15 stations on 3-hour tour:Komsomolskaya, Kieskaya, Novoslobodskaya, Prospekt Mira, Belorusskaya, Mayakovskaya, Novokuznetskaya, Revolution Square (Ploshad Revolutsii), Arbatskaya, Sparrow hills, Victory Park, Slavic Boulevard, Vystavochnaya, Kurskaya, Rimskaya.
Get lucky and see a one-of-a-kindAquarelle Train a picture gallery on wheels, or bump into a hidden entrance to the secret Metro-2.
Take aCoffee Ring ride, check out the station with your sign of the Zodiac, chase the inhabitants of ancient seas, take a selfie with your friendly local guides, and simply have fun!

Yourprivate guide will meet you in the lobby of your hotel. Say zdravstvuyte to Moscow which is as big as Luxembourg, and to Moscow Metro with its 200 stations, 44 of which are recognized as objects of historical and cultural heritage.
Timing is flexible and you can start the tour any time you prefer.

Moscow Metro system consists of 12 lines and well cover all of them on the tour! Take the same subway cars that operate in the countries of the former Soviet Union, as well as in Sofia, Budapest, Warsaw, Prague and Tehran.
Learn interesting facts and stories about the speed of trains, the distance between the stations, what are the busiest lines and get shocked how much it costs to build 1 km of the railway orsimply to rename the station.

Drop into a Moscow Metro museum if its open that day and see the relics of Metro which date back to1930s.

Finish the tour at your hotel, Novodevichy convent, Sparrow hills or any other spot you want.

This tour can be customized to make it a unique experience for you.Your private local guide will meet you in the hotel lobby and discuss the tour itinerary with you at the beginning of the tour.

Highlights of the tour:

You may choose to finish the tour on Sparrow Hills to hunt down the spot where you can see all seven of Stalin sisters at once!

Flexibility during the tour

Meeting in the hotel