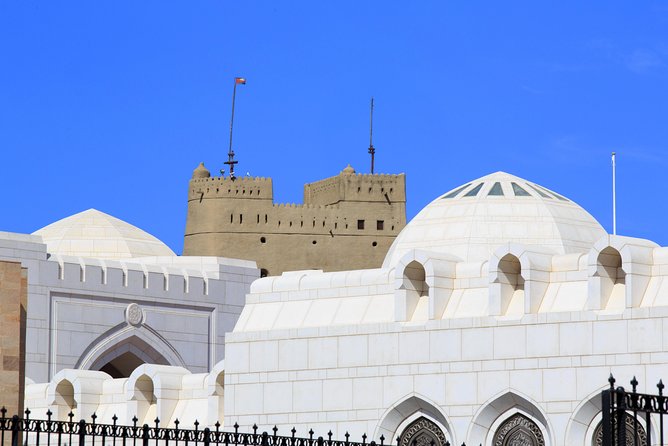 The tour begins by driving through the beautiful embassy quarter of Muscat en route to Sultan qaboos grand mosque. Visit the mosque, a religious landmark of Muscat and splendor of unique Islamic architecture (Islamic dress code to be observed).

The next stop is the Omani Museum, which offers a wealth of information about the country's culture, tradition and history. Then on to Muttrah, a delightful quarter of Muscat, complete with traditional souk and Fish market.

From Muttrah the drive continues to Muscat Old Town where the tour proceeds on foot, strolling around the palace of Sultan Qaboos and the forts Jalali and Mirani.

Buses used for excursions are of the highest standard available. All buses are air-conditioned and equipped with a microphone.

4x4 vehicles used for the off-road safaris are air-conditioned with a maximum capacity of 6 passengers plus driver. All drivers are qualified off-road professionals, first-aid trained and carry cell phones. All vehicles are equipped with seat-belts and passengers are required to wear them at all times.

Lightweight summer clothing is suitable for most of the year, but sweaters or jackets may be needed for the winter months, especially in the evenings. Good quality sunglasses are advised, and photo-chromatic lenses for those who wear spectacles. Hats or some protection for the head are advisable when in direct sunlight. Oman has conservative dress traditions. Swimwear should be confined to the beach and hotel pools. Men and women should ensure shoulders and knees are covered when in public, especially in souks, shops and villages.To enter the mosque you need to wear long trousers or skirt until your ankles, a long sleeved shirt and a scarf covering your hair and neckline.

Normal tourist photography is acceptable, but it is considered offensive to photograph Arab women. It is also courteous to ask permission before photographing men. Photographs of government buildings or military installations are not allowed.

The tour operator reserves the right to cancel any part of this tour for reasons of government decisions, public holidays, weather conditions, or similar.