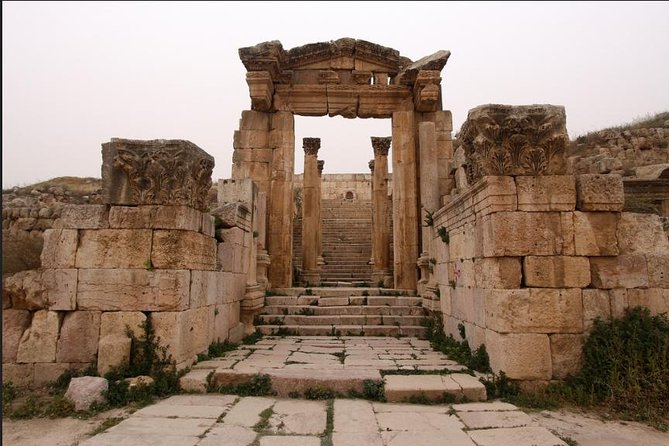 Revert in time on this private 8- hour trip to explore tow of the world best-preserved Roman architecture start with the visit of Pella, where ancient relics intermingle with Roman monuments; proceed to explore Jerash to see the incredible relics, including the Oval Plaza, gateways and streets; in addition to one of the greatest examples of Islamic Ayyubid military architecture Medieval Castle of Ajloun, built by the Muslims during the 12th Century in the time of Saladin for defensive purposes during the crusaders.

You will be picked up from your hotel in Dead Sea area to visit of Jerash, The most complete and well preserved city of the Roman Empire. Jerash is one of the Decapolis cities to the north of Amman. During the Roman Empire it was often called Pompoeii of the East, which indicates the great example of Roman urbanization. A journey through time walking its streets, theaters, temples and places among the great colonnade, the Arc de Triumph, the Oval Plaza and the temples of Zeus and Artemis. Continue to the city of Ajloun visit the Medieval Castle of Ajloun built by the Muslims during the 12th Century in the time of Saladin for defensive purposes during the crusaders. Enjoy the beautiful scenery and green north fields from its unique towers. There are two theories for the name of Ajloun either (iron) as there was iron material in the area or because it was built on top of a monastery after the priest name.

Drive to visit Pella (Also known in Arabic as Tabaqat Fahl) is considered one of the most outstanding historical sites on the map of Jordan tourism, its rich in Archaeological monuments that go back to the Antiquity. During this period Pella was one of the ten cities making up the Decapolis.

Pella is a village in North West of Jordan, its located to the East of Al Masharih town; the city was constructed in the Hellenistic Era in the time ofAlexander the Great. The first literary reference to the city is from the 19th century BC when it is mentioned in Egyptian texts asPihilum, orPehel. It was a flourishing trade center, with links withSyriaand Cyprus as well as Egypt. On the division ofAlexander's Empire, its name was later Hellenized to Pella, in honor of Alexander's birthplace.

In the 7th century AD, Pella was captured by Arab armies and was a significant city in the Umayyad Empire for over 100 years.But in 747 AD, Pella (along with much of Jordan) was destroyed by a huge earthquake. Only a small, rural community lived here afterwards, during the Mamluk and Abbasid periods.

Pella is considered more significant to archaeologists than Jerash as it reveals evidence of 6000 years of continuous settlement. In fact, its regarded as the most historically significant site in all Jordan.

Hotel pick-up and drop -off

Local Guide where not mentioned

All type of meals and beverages