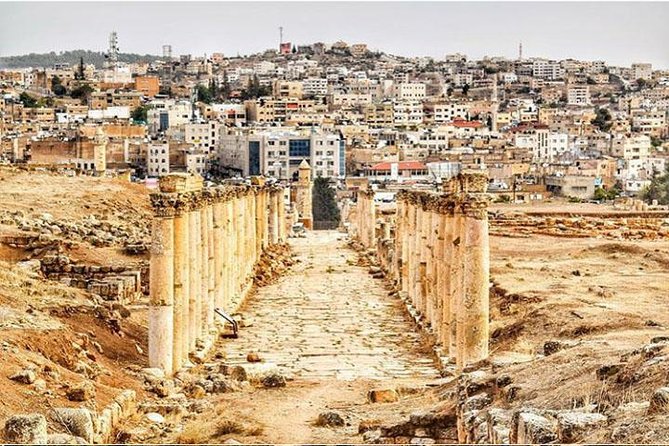 Discover ancient civilizations from the Roman Empire and beyond on this private day tour to Jerash, Ajloun, and Umm Qais from Amman. Follow your private guide through the streets of Jerash, widely considered among the best-preserved of all the worlds ancient Roman cities. Admire plazas, temples, theaters, and colonnaded avenues once abuzz with life under Roman rule. Discover settlements dating from the Bronze and Iron Age, and gaze back over 2,500 years of human occupation. With your private guide to lead the way, choose your route to see the attractions of most interest. Continue to Aljoun, a hilltop medieval fortress built to defend against the Crusaders. Visit Umm Qais, a scenic hillside site strewn with the well-preserved ruins of the Greco-Roman city of Gadara. Local Guide, all entrance fees, and private round-trip transportation is included.

Begin your private tour with a pick up from your central Amman hotel, and travel by comfortable, air-conditioned vehicle to Jerash. Wander among the original temples, theaters, plazas, paths, and colonnaded streets, all enclosed within the remaining city walls. Within the city walls have been found the remains of settlements dating from the Bronze Age, the Iron Age, the Hellenistic, Roman, Byzantine, Umayyad and Abbasid periods, indicating human occupation at this location for more than 2,500 years. A local English-Speaking Guide will be included for your classic 2 hours visit of this Roman Decapolis City of Jerash. This ancient city was one of the most prosperous in the Roman Empire, and was covered by sand for centuries until its remnants were discovered in 1806. Head through the ancient city gate and walk around the well-preserved ruins as your guide tells you tales about the city in its heyday. See its arches, theaters, and elegant colonnaded street. Snap photos of the stunning Oval Plaza, the intriguing egg-shaped public square framed by standing columns.

Having explored here, continue to the 12th-century Castle of Ajloun, built in the time of Saladin to defend against Crusader armies. Head inside this semi-intact hilltop fortress, and roam the rambling corridors and staircases. See the murder holes through which occupiers could pour hot oil or pitch on invaders, and admire the stunning views over the lush hills of the Jordan Valley from the towers.

Finally, venture northward through Jordans green landscapes to the village of Umm Qais, overlooking the ruins of another Roman Decapolis city known as Gadara. Soak up the views from here over the Sea of Galilee and Golan Heights to explore the Greco-Roman ruins, including the amphitheater, crumbled mausoleum, basilica terrace, as well as other theaters and treasures. Then, visit the towns museum to admire some of the precious artifacts recovered from the site, including mosaics and marble statues. Then, reconvene with your vehicle and relax on your long ride back to Amman where your trip ends with a hotel drop off.