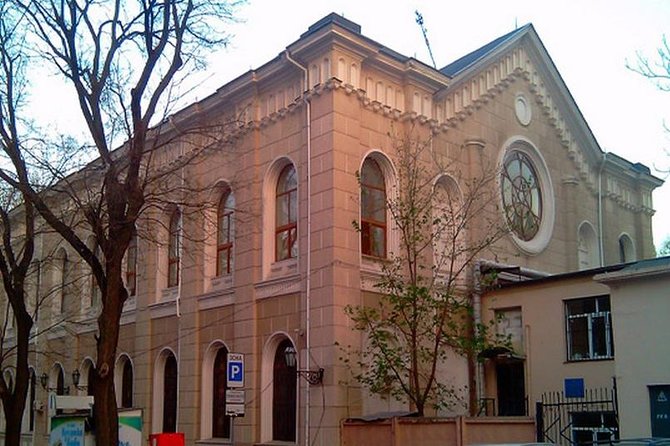 During 2.5-hour private tour, an expert guide will acquaint you with the history of Jewish community of Odessa. You will see the poor Jewish yards and chic mansions, will visit a Central Synagogue and places of memory. Learn the history of great people, feel the atmosphere of the old Odessa, shed a tear and be sure to laugh over inimitable Jewish anecdotes.

Learn the most important facts from the history of Jewish comunity in Odessa on a comprehensive tour with a local guide.

It is considered that Jews appeared in Odessa even before its foundation. It is also known that at the first census of population at the end of 18th century there were 106 Russians, 213 Ukrainians, 224 Greeks and 240 Jews in a new town.

Therefore, we invite you to learn more about the phenomenon of Odessa Jews, to feel that contemporary Odessa would not be possible without them. Not surprisingly, only this South city could give so many great Jews to the world. L. Utesov and I. Babel, Sholem Aleichem and M. Zhvanetsky has visited Odessa in different times.

Walking through the old Jewish Quarter and Jewish Street, you will learn why Jews were called the people of air and what simple and unprofitable businesses they were allowed to do at the beginning of 19th century. You will be surprised, learning that in spite of all prohibitions quite soon Jews became the most influential and rich habitants of city.

In addition, your expert guide will tell you about the tragic pages of Jews life in Odessa. There were pogroms and Holocaust, Soviet persecution and forced emigration in their history. Nevertheless, there were also the sentimental declarations of love to Odessa, made by thousands and thousands of Jews, who live and work around the world, but still call Odessa their Motherland.

You may also visit the Jewish museum of Odessa and find out more interesting information about the Jewish community (optional). The tour ends in the center of the city.

Entrance fees to the Jewish Museum of Odessa (optional visit)

Jewish Museum of Odessa operates Mon-Tue from 1pm till 7pm, Sun from 10am till 4pm, closed on Fri, Sat and Jewish holidays