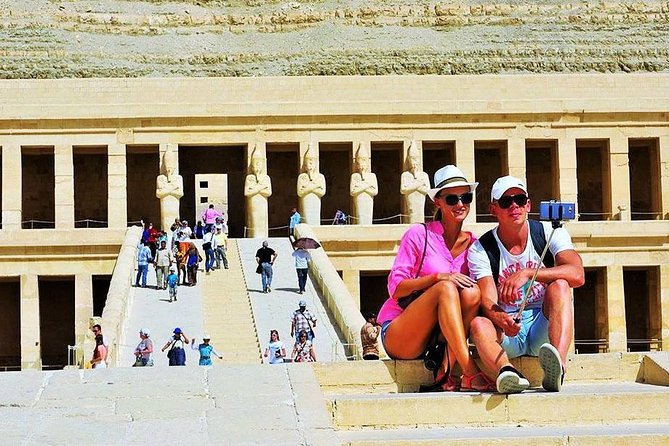 Explore all that the ancient city of Luxor has to offer on a full-Luxor Day Tour to East and West Banks of the Nile River. Enjoy a professional guided tour to the Valley of the Kings, Queen Hatshepsut Temple, Colossi of Memnon, Karnak Temple. and Luxor Temple in accompany of a Local Egyptologist tour guide.

Start your Over day tour, after picking you up from the hotel, cruise , airport , Bus or train station to the east bank of Luxor where you will be accompanied by Private English Egyptologyguide to visit the Karnak Temples, the greatest example of worship in history and was dedicated to the God Amon, his wife Mut and their son Khonsu. It was constructed from the beginning of the Middle Kingdom to the Graeco Roman Kingdom.

Then move to Luxor Temple. It was built by Amunhotep III in 18th Dynasty in the New Kingdom and it was completed by Ramesses II during the 19th Dynasty. King Ramses II was the most famous king in the 19th Dynasty. He ruled Egypt for about 67 years. It was dedicated to the great god Amun-Ra, his wife Mut and their son Khonsu together representing the Theban triad. Enjoy visiting Obelisk of Ramses II in front of the 1st Pylon.

Lunch will be serving during your tour at Lovely Egyptian restaurant .

After will continue the tour to explorehe West bank of Luxor. Start your day visiting Valley of the Kings, the magnificence of the grandeur of architecture which was used for burial, there are many kings buried in this valley. You will visit 3 tombs excluding Tomb of King Tutankhamun.
Move on to enjoy the Temple of Queen Hatshepsut, which was built by Queen Hatshepsut, daughter of Thutmose I, who ruled Egypt about 20 years during the 18th Dynasty (approximately from 1490 to 1469 B.C), the only pharaonic woman who reigned ancient Egypt. Later on you will be transferred back to your hotel , Train , airport or bus station in Luxor.

Pick up services from your hotel , Cruise , Airport , Train or bus station in Luxor and return

All transfers by a private air-conditioned vehicle

Any extras not mentioned in the program