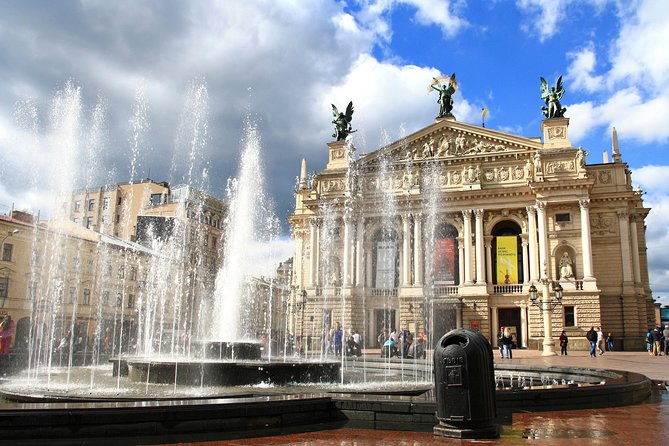 A fascinating 2.5-hour private walking tour will introduce you to the main sights of the UNESCO-listed Lviv Old Town. You will uncover the story of how the city was founded, how it developed through the centuries, and its famous characters who lived there. Ancient Lviv will impress you with its splendid architecture and special atmosphere. Narrow streets, gothic facades, centuries-long history, and much more will make this walk an unforgettable experience.

You will meet your local guide in front of the Lviv Opera and Ballet House and follow the tracks of the Middle Ages. You will enjoy the fascinating story of how the architectural ensemble formed the heart of the city, Market square. In Market square, there was a rule of "equal opportunity" where wealthy locals who dreamt of settling down here were forced to build their houses in such way that they could have not more than three floors and three windows along the faade. The four corners of the square are decorated with the beautiful fountains with Greek mythology figures. There is an impressive City Hall just a few steps from it.

Walking through the narrow streets of the historical center of Lviv, passing the old churches, stately homes, statues and monuments of famous people, you will admire the Old Town, which is now included on the UNESCO World Heritage List. Over the course of this walking tour, pay special attention to the masterpieces of local architecture like the Church of the Jesuits, built in the Baroque style, as well as one of the city's oldest churches - the Latin Cathedral, partly preserved the features of the original Gothic layout. In addition, you will certainly see a famous and very unique Chapel of the boim family made of gray and blackened sandstone and decorated with incredible baroque carvings.

The highlight of the tour is a visit of the Pharmacy museum, which is one of the oldest operating pharmacies in Europe. Passing through the north side of town, you will explore the Armenian quarter - one of the most interesting places in Lviv, where the local Armenians created the center of their cultural life with its unique architecture and original spirit of the ancient civilization. This is especially felt in the Armenian Cathedral, a unique sample of Eastern culture in Europe.

Tour ends in the center of the city. Your friendly guide will advise you the best restaurants and cafes that you may visit in your free time.