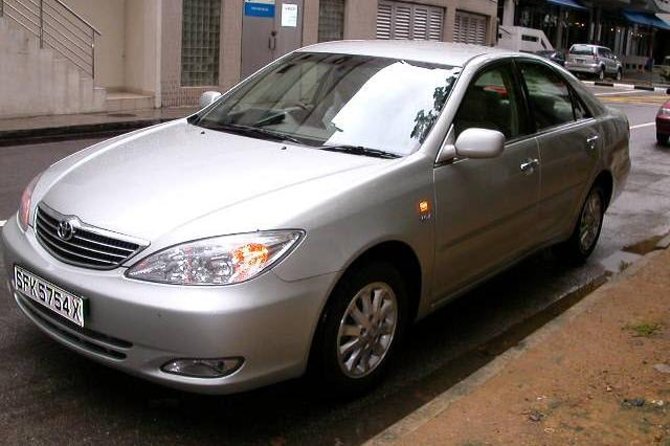 Travel to the Singapore Changi Airport from the Singapore Cruise Centre with ease by pre-booking this private transportation service. Whether traveling individually, as a couple or with a group, this comfortable and stress-free transfer will get you to the airport in no time, ensuring that you dont miss your flight. Depending on the size of your traveling party, this service provides a standard sedan (up to two people) or minivan (three to six people) with the option of upgrading your standard sedan to a luxury vehicle.

After your cruise, enjoy a worry-free transfer from the cruise port at the Singapore Cruise Centre or the Tanah Merah Ferry Terminal to the Singapore Changi Airport through this private transfer. Your friendly driver will pick you up from a pre-arranged location at the cruise port and drive you in a private sedan or a private minivan, depending on the size of your party. Enjoy a luxurious ride to the airport by upgrading your standard sedan to a Mercedes.

At the time of booking, you MUST advise your cruise ship details (arrival time and location) and your flight details. Your transfer will be confirmed instantaneously and you will be provided with a travel voucher to present to the driver. Approximately 24 - 48 hours prior to your departure time, you will be required to reconfirm exact pickup time and place (the contact number will be provided on your travel voucher).

Price is per person, based on 3 adults per car/vehicle.

Each traveler is allowed a maximum of 1 suitcase and 1 carry-on bag. Oversized or excessive luggage (e.g. surfboards, golf clubs or bikes) may have certain restrictions, please inquire with the operator prior to travel to confirm if your excess luggage is acceptable (contact info will be provided in your confirmation voucher)

Price is per person, based on 3 adults per car/vehicle.