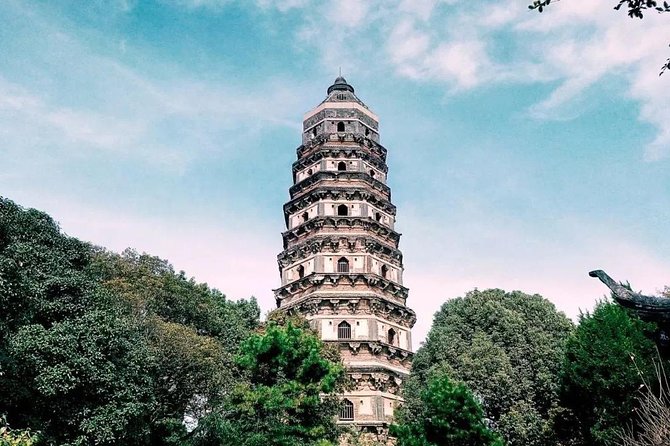 Suzhou is a famous historical and cultural city with a blend of classical gardens and water ancient towns. With the assistance of professional guide from MoreFunAsia Shanghai Tours, we will walk into Suzhou. This tour offers a great chance to appreciate Suzhou's classical gardens, Shan Tang Street and Tiger Hill. The original allure of these sites have been preserved, and they represent Suzhou's antiquity and appreciation for art.
1. Visit a UNESCO World Heritage Site - Lingering Garden.
2. Walk along Shang Tang Street and enjoy local lifestyle
3. Visit Tiger Hill and its leaning pagoda
4. Experience high-speed trains and local public transportations

Itinerary
This is a typical itinerary for this product
Stop At: Tiger Hill, No.8 Huqiushan, Suzhou 215008 China
Known also as Surging Sea Hill, is 36 meters (118 feet) in height. Climbing it, you will find a number of historical sites, some of which can be traced back over 2500 years ago, the founding year of Suzhou. The most attractive spot is the Tiger Hill Pagoda, also called Pagoda of Yunyang Temple, which is famous for being a leaning tower.
There are thousands of magnificent bonsai trees on display in the Tiger Hill. The miniature replicas of full sized gardens will surely amaze you and will give an insight into the skill and the artistry of Chinese master gardeners that has been handed down long ago.
Although the hill is relatively small, it has rich history.
Duration: 2 hours
Stop At: The Lingering Garden, NO. 338 Liuyuan Road, Jinchang Dist, Suzhou 215008 China
Lingering Garden enjoys the equal popularity with Humble Administrator's Garden. Originally a classical private garden, it is one of the four most famous gardens in China. Possessing typical Qing style, it is well-known for the exquisite beauty of its magnificent halls, and the various sizes, shapes, and colors of the buildings. In 1997, it was recorded on the list of the world heritage by UESCO.
Duration: 1 hour 30 minutes
Stop At: Shantang Street, Jinchang District, Suzhou 215008 China
Shantang Street is an ancient street with more than one thousand years history, lined with old buildings like memorial archways, ancestral temples, guild halls and modern buildings such as souvenir shops, tea houses and restaurants. The street reflects prosperity of both the present and the past Suzhou. Especially the southeast part of the street, also called old Shangtang Street, extends 360 meters (395 yards) long. There assembles various artifacts stores and local snacks. In addition, you can see a large ancient architectural complex, Yuhan Hall, which is the former residence of the official in Ming Dynasty (1644 - 1911).
Duration: 1 hour 30 minutes