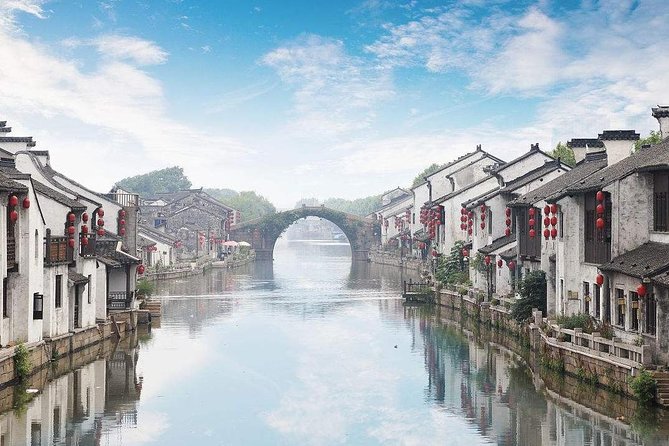 This full-day sightseeing tour will both take you to explore Suzhou-china">Suzhou gardens and one of the most impressive Water Towns--Tongli water town in Suzhou. Wander through the trails and portals of Lingering garden that carefully combines traditional Chinese architecture with natural beauty, visit Suzhou museum to learn the profound history of Suzhou, learn silk culture and how the silk was made into fabric in Suzhou No.1 Silk Mill, walk around the Tongli water town to experience the old lifestyle of ancient China and the tranquil beauty.

Meet your private guide upon pickup at the Suzhou railway station or your hotel lobby in Suzhou.

Your day tour starts at theLingering Garden, a UNESCO World Heritage Site and one of the city's finest classical gardens. It has been listed as one of the four most famous national classic gardens called China's four largest gardens. Landscape architectural space processing is very exquisite, using a variety of artistic techniques, built a unique space system, becoming one of the world civilization examples of architectural space art processing. A good place to let your mind and body rest.

Next head toSuzhou museum. It has been a highly-regarded regional museum with a number of significant Chinese cultural relics. The new Suzhou museum designed by world famous architect I.M.Pei was completed in October 2006. Not only does the museum become a monumental design building in Suzhou, but also a significant construction, merging the traditional Chinese architectural design with the future. It enhances the protection of Suzhou cultural heritages, and enables Suzhou museum to turn on a new page.

TheNo.1 Silk Factory, it shows the history of Suzhou silk and some ancient collections; the working spot, where you can see how the silk is made. Meanwhile it also describes the history of the development of Chinese silk response which further profound Chinese culture. In this factory you can not only see how the silk is processed from worm to the final product, but also learn some histories of silk in China.

Tongli Water Town:At last, drive you to Tongli, it is one of most famous ancient water towns in the south of the Yangtze River Delta, which are famous for their rivers, ancient bridges and house complexes. Tongli occupies an area of 51 square miles (133 square kilometers) with a population of 55,000. The city is separated by 15 rivers into seven islets, which are connected through 49 ancient bridges. The most famous bridges among the 49 bridges in Tongli are the three bridges called Taiping (peace), Jili (luck) and Changqing (celebration) bridges, which has been important landmarks of the place and regarded as the sacred architecture by the locals. Tongli is located a short drive from Suzhou and about an hour drive outside of Shanghai. Tongli Water Town deserves its name of a museum of ancient architectures as there are many homes and temples dating from the Ming and Qing Dynasties. Designed along the riverside and embellished with carved windows, porcelain furniture, figured clay bricks, flying eaves, dapper gardens and tiny stairs leading all the way down to the water, these complexes named Tongli Water Town could be a shining pearl among the water townships south of Yangtze.

Drive you back to your hotel or Suzhou train station after the tour is concluded.