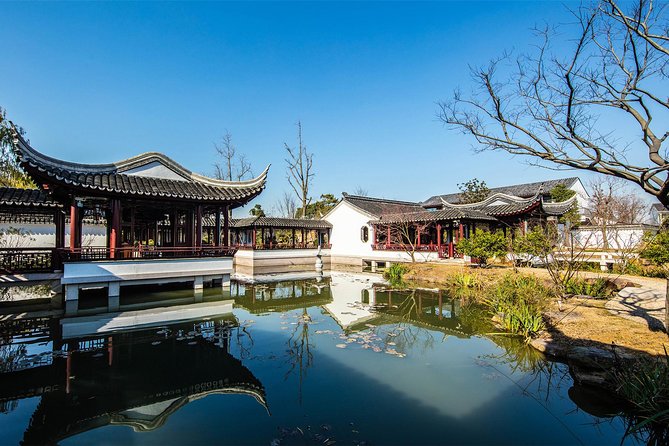 Suzhou, not only noted as the City of Garden, it's gain the fame of "Venice of the Orient". This private Suzhou day tour is customized for those who are not interested in Shopping. Follow your personal tour guide to explore the most famous garden of Suzhou, the Humble Administrator's Garden, pay a visit to Hanshan Temple and Panmen Gate, the historical landmark in Suzhou, stoll down Pingjiang Historic Street to see the old lifestyle of locals in Suzhou, what's more, a visit in Suzhou musuem can not be missed.

Itinerary
This is a typical itinerary for this product
Stop At: Humble Administrator's Garden, No.178 Northeast Road, Pingjiang District, Suzhou 215001 China
Pick up service is arranged at your hotel in Suzhou downtown or Suzhou train station.
You'll start the day with the Humble Administrator's Garden, which is the largest private garden in Suzhou with a total area of 51,950 square meters (5.2 hectares) in the northeastern part of Suzhou. It has been listed as one of the four most famous national classic gardens together with the Summer Palace, Mountain Summer Resort in Chengde and Lingering Garden of Suzhou. The garden consists of Eastern, Central and Western sections as well as some residences of the former owners. The art of the Humble Administrator's Garden has a prominent position in the history of China's garden creation. It represents the historical characteristics and achievements of south-east China's private gardens.
Duration: 1 hour 40 minutes
Stop At: Hanshan Temple, Fengqiao, Suzhou China
Move on to Hanshan Temple (Cold Mountain Temple) near the town of Fengqiao. Made famous in a poem by Tang Dynasty poet Zhang Ji, this Buddhist temple is known for its large bells, unique black roof and domed bridge. Take a wander around its halls, pavilions, corridors and well-maintained gardens. A good place to let your mind and body rest.
Duration: 45 minutes
Stop At: Panmen Gate, No.1 East Street, Canglang District, Suzhou 215002 China
Next agenda is Panmen Gate. The history of the Panmen Gate dates back to 514 AD. Built by Wu State during the spring and autumn period, Panmen is the only ancient city wall still intact in Suzhou.
Duration: 1 hour
Stop At: Pingjiang Road, Pingjiang District, Suzhou China
For an authentic taste of city life in old Suzhou, a stroll down Pingjiang Historic Street, which is a great way to get acquainted with the local vibe. Quiet, leafy and slow-paced, the street is lined with old Chinese houses as well as restaurants and teahouses serving traditional foods and drinks. What's more, there are a variety of upscale cafes catering to the chic crowd at each corner. You can taste a few traditional Chinese snacks while your guide tells you more about the history of the street.
Duration: 1 hour
Stop At: Suzhou Museum, 204 Dongbei Jie, Pingjiang District, Suzhou 215000 China
Your last stop is Suzhou Museum. It has been a highly-regarded regional museum with a number of significant Chinese cultural relics. The new Suzhou museum designed by world famous architect I.M.Pei with the area of over 10,700 square metres. Not only does the museum become a monumental design building in Suzhou, but also a significant construction, merging the traditional Chinese architectural design with the future.
Drive you to your hotel in Suzhou downtown or Suzhou train station and your tour ends.
Duration: 1 hour 15 minutes