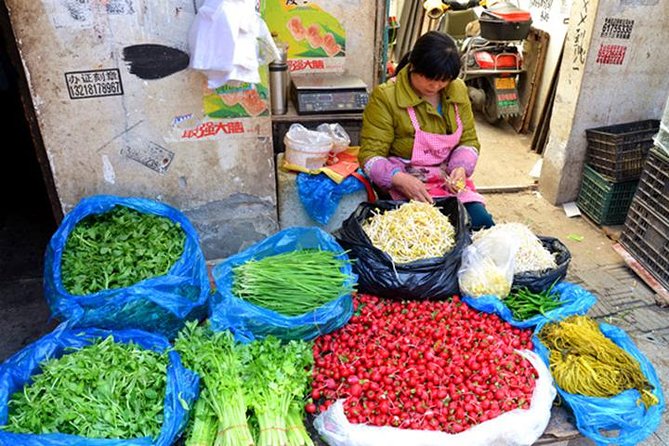 Suzhou is famous for its enticing gardens and water towns. While this tour takes you to see the off-beaten-track areas mixed with various surprises of local flavors. Overall, the tour covers Fengmen Cross Street (Fengmen Hengjie), Antique Market at the Confucius Temple, Bird and Flower Market at Pishi Street, Ligong Causeway at Golden Chicken Lake, The Garden of Cultivation, Pingjiang Road, and a Kunqu Opera at a Tea House. You may have a chance to visit the performers backstage and watch them put on makeups.

In the morning, your tour guide and driver will meet you at your hotel lobby. Today, you will first visit the Fengmen Cross Street. In the central part of Suzhou Old Town runs Fengmen River. Peasants used to transport groceries along this river before trading them. Fengmen Cross Street, the marketplace, is 1,936 feet/590 meters long and just 16 feet/5 meters wide. You will see vendors peddling their commodities along the interlaced alleys in this bustling area, which is definitely a hidden gem for anyone looking to experience local food culture. Then you will visit the Antique Market at the Confucius Temple. Browse through the stalls for some authentic Chinese antiques. Following that, you will visit the Bird and Flower Market at Pishi Street. There you will see numerous local flowers and plants.

Ligong Causeway at Golden Chicken Lake (Jinji lake) is a waterfront commercial street. Since its debut in December 2006, Ligong Causeway, the only long dike along the Golden Chicken Lake, has become the most successful commercial street with modern business in Suzhou. At the same time, it also becomes a landmark of this city and the representative of modern landscaped business district in Suzhou. Continue your tour to visit The Garden of Cultivation, which is small in scale but distinctive in artistic characteristics of the Ming Dynasty (1368-1644). It is simple, rustic, natural, and still keeps much of the layout, design principles and other characteristics of a Ming garden. The next place is Pingjiang road. It covers and influences an area of about 116 hectares and maintains the rough layout as on the Pingjiang Map which dates back to the Song Dynasty (960-1279). It boasts a typical ancient Suzhou style for its chessboard layout with lanes extending alongside rivers and its typical southern architectural style of white walls and black tiles. At last, you will enjoy a marvelous Kunqu Opera at a local tea house while sipping a cup of Chinese tea. At the end of the tour, you will be transferred back to your hotel.