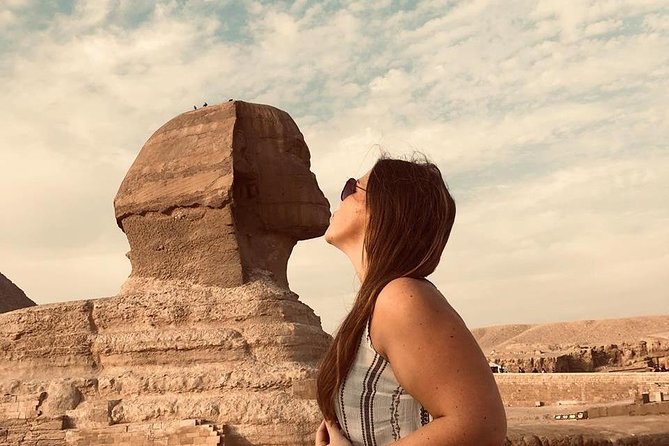 Get up close to the major pyramids of Dahshur, Saqqara and Giza on this private 2-day tour, led by a qualified Egyptologist. Then see the sights of Cairo, including the antiquities of the Egyptian Museum, atmospheric mosques and churches in the Citadel, and khan El Khalili Bazaar. Youll have lunch in a restaurant overlooking the Great Sphinx of Giza

Itinerary
Day 1: GIZA PYRAMIDS AND DAHSHUR AND SAQQARA
Stop At: Pyramids of Giza, Al Haram Str., Giza 12611 Egypt
Dahshur, Saqqara and Giza, Your first stop will be Dahshur, where you will see the Red Pyramid (first true pyramid) and the Bent Pyramid (first attempt to build a true pyramid). Then move on to Saqqara and explore the Step Pyramid Complex of King Zoser (oldest complete building of stone). Have a look at the Pyramid of Unas (first pyramid with texts inside), the causeway of Unas, the Pyramid of Userkaf, the Pyramid of Teti (accessible with pyramid texts inside) and the tomb of Kagemni in Saqqara (a noble man of the Old Kingdom 2200 B.C.). Afterwards your guide will take you to Giza, where you will see the Pyramids of Cheops, Chephren and Mycerinus.
Afterwards, explore the Valley Temple and take a closer look at the Great Sphinx.
Duration: 8 hours
Meals included:
Lunch
No accommodation included on this day.
Day 2: EGYPTIAN MUSEUM AND OLD CAIRO
Stop At: The Museum of Egyptian Antiquities, Midan El Tahrir Geographical Society Building, Cairo 11511 Egypt
Cairo Your first stop will be the Egyptian Museum. See the animal mummy room, the mummy portraits and King Tutankhamen's jewelry. Visit the Royal Mummy rooms (at extra cost) then move to Old Cairo and see the main sights, such as the Roman Fortress of Babylon and the Hanging Church, the Church of Abu Serga, and the Jewish Synagogue of Ben Ezra. Explore the Citadel of Saladin and take some pictures of the panorama of the citadel, before exploring the mosque of Mohammed Ali Pasha inside the citadel. Take a stroll over Cairo's biggest market, Khan El Khalili Bazaar, then drop you of at your hotel.
Duration: 8 hours
Meals included:
Lunch
No accommodation included on this day.