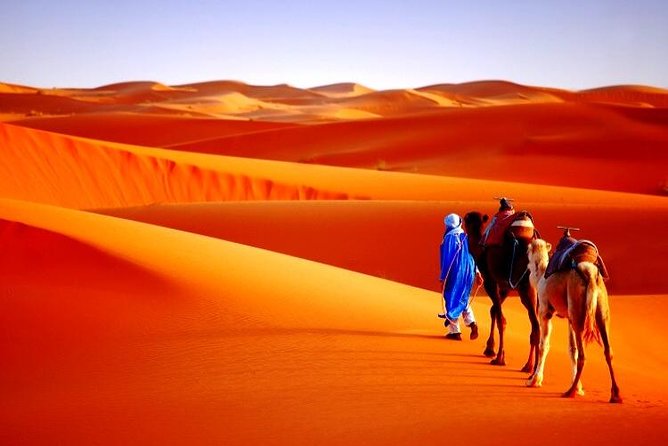 This exceptional tour is a perfect opportunity to discover the Moroccan cultural and architectural heritage.

Day 1: Marrakech or Casablanca - Rabat
Upon arrival in Marrakech or casablanca , a guide will greet you and join you for the trip to Casablanca, where you'll explore the city's sights. Continue to Rabat for lunch, then check into a five-star hotel or riad.

Day 2: Rabat - Meknes - Volubilis - Fez
Depart to Fez after breakfast, with stopsalong the way atMeknes and Volubilis, stepping out for guided tours at each destination.From here its a short drive to Fez, where you'll check in to a cosy riad.
Day 3: Fez
After breakfast, start the day with a guided tour of the Fez medina,one of the worlds largest walled cities. Lunch is in a traditional restaurant in the heart of the old city, and you'll wrap up the day of exploring with dinnerat your riad.
Day 4: Fez - Ifrane - Azrou - Midelt - Erfoud
Leave Fez for southernMorocco, driving into the Sahara Desert with abrief stopat Ifrane and at Azrou's cedar forest, as well as a lunch break in Midelt.
Overnight in an Erfoud luxury hotel.
Day 5: Erfoud - Rissani - Merzouga - Erg Chebbi dunes
After breakfast,hop a your vehicle to the largest dunes of Morocco, visit Erfoud, and havelunch in a desert oasis. Afterwards, ride a camel toa desertcamp in time for sunset, a traditional dinner, and a campfire.
Day 6: Erg Chebbi dunes - Merzouga - Rissani - Todra/Dades Gorges
Enjoy the sunrise over the dunes before departing to Rissani. ContinuetoDades for lunch, then drive to the Dades valley. You will stop to visit Todra gorges and Dades gorges.
Day 7: Dades- Skoura- Ouarzazate After breakfast , departure to Ouarzazate through the palm grove of Skouka.You will arrive in Ouarzazate for the lunch .Then, you will visit one of the famous cinema studios and Kasbah taourirt .
Day 8: Ouarzazate - Marrakech After breakfast , departure to AitBenHaddouKasbah a fortified adobe village protected by UNESCO. Continue your drive across the High Atlas on the breathtaking road of theTizi-N-TichkaPass. You will arrive to Marrakech in the afternoon.

Day 9: Marrakech
Spend the whole dayexploring Marrakech's main sites with a local guide, then make an evening trip to Jemaa el Fna.
Day 10: Marrakech or Csablanca departure
After a free morning you'll be transferred to the airport. The guide can assist withregistration and departure.