Private Tour : A Battle Of Giants Waterloo Memorial Tour From Brussels Half Day

Private Tour : A Battle Of Giants Waterloo Memorial Tour From Brussels Half Day 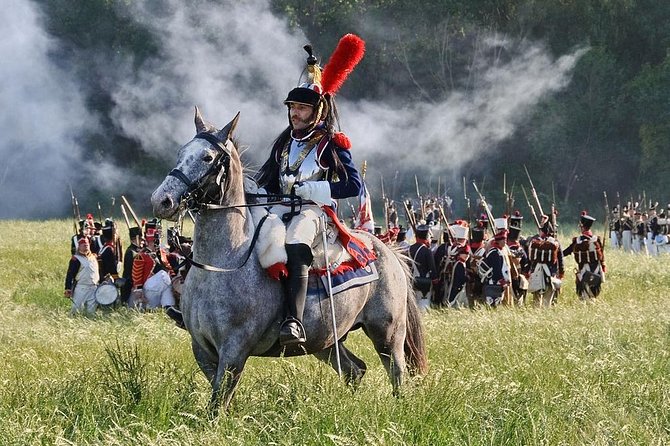 VisitWaterloo with a professional driver and a tour guide.
Our tour is customizable. Here you can find a general programme of your visit:
It might be 200 years since the Battle of Waterloo, but those nine hours of bloodshed and the final defeat of Napoleon completely changed the course of history. The Waterloo Memorial Site is a must-see on your trip to Brussels.
Highlights
Learn how the battle developed
Visit the Waterloo Memorial Site
Marvel at the Panorama
Relax and enjoy one of the five beers produced at a microbrewery
After the visit, the guide and the driver will drop you off at your hotel or elsewhere in Brussels.

Itinerary
This is a typical itinerary for this product
Stop At: CrossFit Lion Hill - Waterloo, Drve Richelle 12, 1410 Waterloo, Belgium
e Battle of Waterloo.Listen as your guide explains the history of the battle, during which the French army fell to the Duke of Wellingtons British and Prussian forces, leaving 12,000 dead and 35,000 wounded. A pivotal point in these nations histories, the Battle of Waterloo led to the final defeat of controversial French Emperor Napoleon Bonaparte, effectively ending the era of Frances domination in Europe.See where the complex battle plans were laid out at the Dukes former headquarters (now the Wellington Museum) and La Belle Alliance, an inn that Napoleon commandeered as his headquarters. Take in panoramic views over the battlegrounds from atop Lion Hill, a man-made hill erected as a monument to honor William II of the Netherlands.Then take a driving tour of the battlefield itself, and stop at a few significant sites to go more in depth with your guide. Youll see where some of the bloodiest episodes took place at Hougoumont Farm, Papelotte Farm and Ohain Road. Youll also visit La Haye Sainte, a series of farm buildings that served as a hiding place for the Dukes men.Commemorate fallen soldiers at the Gordon Monument, in honor of Lieutenant-Colonel Sir William Alexander Gordon of the Scots Guards, and the Prussian Monument, in the now peaceful village of Plancenoit where the Prussian allies attacked Napoleons forces and won a key victory during the battle.After this fascinating overview of the Battle of Waterloo, hop back in your private vehicle and relax on the drive back to central Brussels.
Duration: 2 hours