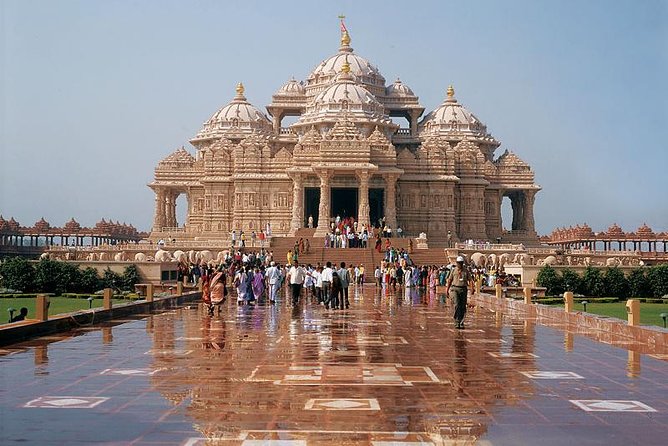 Book the tour offered by one of the most reputable local tour companies in India! As a family business since 1971, the company specializes in hosting international travelers from U.S., Europe, Australia, and everywhere else, and provide high quality service and cultural experience.

After complimentary pickup at your accommodation in Delhi by a private vehicle, start your spiritual journey to South Delhi with your friendly, professional private guide and driver. You will visit some of the most popular and spiritual attractions in South Delhi including the immense Akshardham Temple, the renowned Bahai house of worship named Lotus Temple, the Hare Krishnas ISKCON Temple, and Chattarpur Temple (also known as Shree Adya Katyayani Shaktipeeth Mandir). Enjoy the undivided attention from your guide who will provide insightful commentary throughout the day at each attraction and point out other landmarks en route.

Your day starts with hotel pickup by a private driver, who takes you to Akshardham Temple, Indias largest temple complex, which opened in 2005.
Akshardham Temple features a fascinating combination of grand temple architecture and high-tech interactive displays that resemble a theme park. There's a boat ride (OPTIONAL) that takes you through 10,000 years of Indian history illustrated by 3D dioramas.

Head to your next stop, the Lotus Temple, a Bahai house of worship designed in the shape of a lotus flower. Built in 1986, the stunning white marble flower sits within 26 acres (10.5 hectares) of landscaped gardens, pools and red sandstone walkways. The central prayer hall accommodates about 2,500 people and looks as if it's open to the sky.

Nearby, pop into the extravagant ISKCON (International Society for Krishna Consciousness) temple, which the Hare Krishna movement opened in 1998. The sprawling complex features elaborate high-tech exhibits based on the Bhagavad Gita (a classic Hindu scripture), as well as extensive gardens and cavernous halls.

Your last stop is Shree Adya Katyayani Shaktipeeth Mandir, also known as Chattarpur Temple. Dedicated to the goddess Katyayani, the temple complex is the second largest in India, after Akshardham. Founded in the 1970s by Baba Sant Nagpal, the complex is home to dozens of shrines and large halls, colorful altars and paintings, lodging for devotees, and a towering Hanuman statue.
Your tour then ends with drop-off at your hotel.

Hotel pickup and drop-off at Delhi city hotels only

One bottled water per person

Admission to all attractions (if required)

Some places of worship will require your head to be covered; a scarf or a handkerchief will be enough, and headgear will be available at these locations, as well

If your tour falls on a day that has a religious significance, places of worship may be very crowded on these occasions