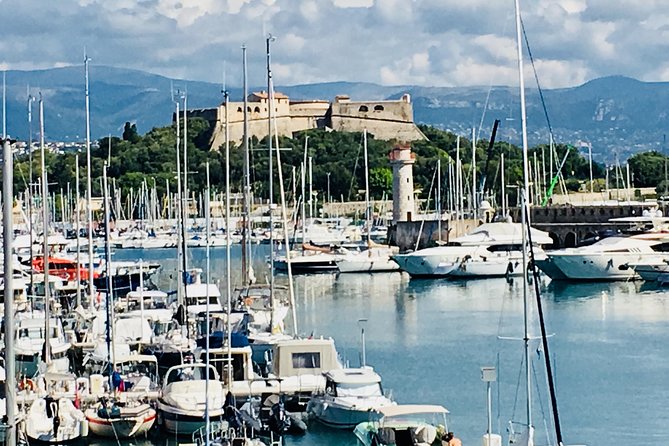 Possibility to choose the number & the lenght of your stop or to change your itinerary as second your point of interest, just ask to your driver : - )

This tour is basically proposed in English & French

Other language : Turkish, Spanish, Italian, are ON REQUEST ONLY !

Itinerary
This is a typical itinerary for this product
Stop At: Palais des Festivals et des Congres of Cannes, 1 boulevard de la Croisette, 06414 Cannes France
Picture stop of the very famous "red carpet"
Duration: 15 minutes
Pass By: Juan les Pins Main Beach, Boulevard Charles Guillaumont, Juan-les-Pins, Antibes France
while driving, admire the sandy beaches, hundreds of shops and bars that make Juan les Pins the "place to be" in summer
Stop At: Marche provencal, 27 cours Massena, 06600, Antibes France
long stop to enjoy the colorful Provencal market, breathe the good smells of freshly picked fruits and vegetables, get a taste of olives and jams and stroll through the cobbled medieval streets or admire the yachts of the quai des millionaires
Duration: 1 hour
Stop At: Chapelle du Rosaire, 446 Avenue Henri Matisse, 06141 Vence France
The blue chapell or Matisse chapell, the work of the artist of the same name, offered to Dominican sisters in the 50's after 4 years of hard work, using only 3 colors
Duration: 15 minutes
Stop At: La Cathedrale Notre-Dame de la Nativite de Vence, Place du grand-Jardin, 06140 Vence France
Medieval town of the 12th century, surrounded by ramparts whose main entrance adjoins "La Tour" and the castle of the wealthy family "Villeneuves" reigning over the city in the 17th century, the tiny cathedral of Vence is proud to house a mosaic of Marc Chagall.

Duration: 30 minutes
Stop At: Saint-Paul de Vence, 2 rue Grande, 06570 St-Paul-de-Vence France
The village of Saint-Paul de Vence harbours countless treasures within its ramparts. Take the time to seek them out around a corner, behind a fountain, at the foot of a bastion... Explore the pedestrian streets of Saint-Paul de Vence and immerse yourself the village's history and heritage... following in the footsteps of one of his best known artist... Marc Chagall. in 1949 He bought a house in Vence close to the Matisse chapel. At the time, the French Riviera was an incredible art center frequented by many artists such as Matisse, Picasso, Magnelli, Lger. In 1962, Chagall decorated one of the chapels of the Notre Dame de la Nativit cathedral. He made a colourful mosaic featuring Moses saved from the waters.
From the end of the 1950s, he participated to the project of creation of the Maeght Foundation that opened in 1964 in Saint-Paul de Vence.
Duration: 1 hour 30 minutes