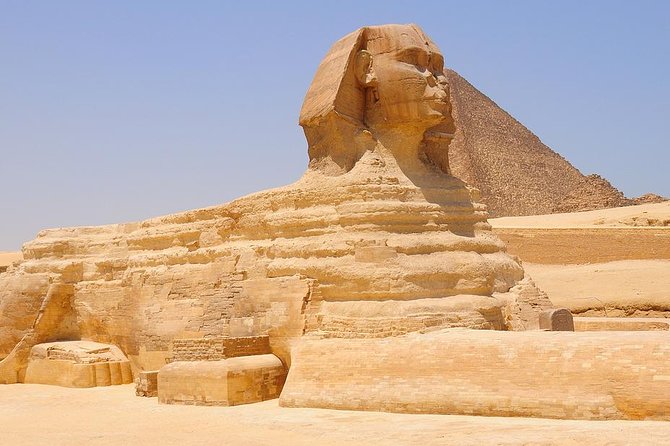 Enjoy a full-day private tour of Cairo and Giza from Hurghada, guided by a qualified Egyptologist. Visit the Pyramids of Giza and the Sphinx, marvel at the Egyptian Museum and its treasures, and discover Old Cairo, including the Roman Towers and Hanging Church. Lunch is included.

Start your tour with an early pickup from your hotel in Hurghada at 1am in a private, modern, air-conditioned minivan. You may wish to bring breakfast for the 6-hour drive to Cairo.

Your Egyptologist guide will greet you on arrival in Cairo and accompany you to the Giza Plateau, where you will stop at the Giza pyramid complex. Your first stop is the Great Pyramid of Khufu, built as a tomb around 2500 BC: it's the oldest of the Seven Wonders of the Ancient World, and the only one that still exists. You'll also see the pyramid of Khafre, son of Khufu, and the pyramid of Menkaure, Khufu's grandson.

Climb to the highest point of the plateau for panoramic views of the area great for selfies! If you choose, your guide can arrange an optional camel ride, a trip inside a pyramid, or a visit to the Solar Boat Museum. Finally, you'll visit the world-famous Sphinx.

After an early lunch at a local restaurant, drive back to Cairo and the Egyptian Museum, home to more than 120,000 ancient Egyptian artefacts. See the sparklingtreasures of Tutankhamen, including his gold funereal mask and coffin. Visit the room of the heretic king Akhenaten and the Animal Mummies Room. Admire the oldest life-size statue of King Djoser, who built Egypt's first pyramid, along with a range of art and sculpture. (Tickets to the Royal Mummy Room are available at an additional charge.)

Finally, drive to Old Cairo to wonder at the remains of the Roman Towers, built by the emperor Trajan atop an existing fortification, and the Coptic Christian Hanging Church with its ancient architecture and beautiful icons. You'll be back in the van around 3pm, returning to your Hurghada hotel in time for a 9pm dinner.

Wi-Fi during the tour in Cairo

A dress code is required to enter places of worship. No shorts or sleeveless tops allowed. Knees and shoulders MUST be covered for both men and women. You may be refused entry if you fail to comply with these dress requirements.

Bring a hat and sun cream