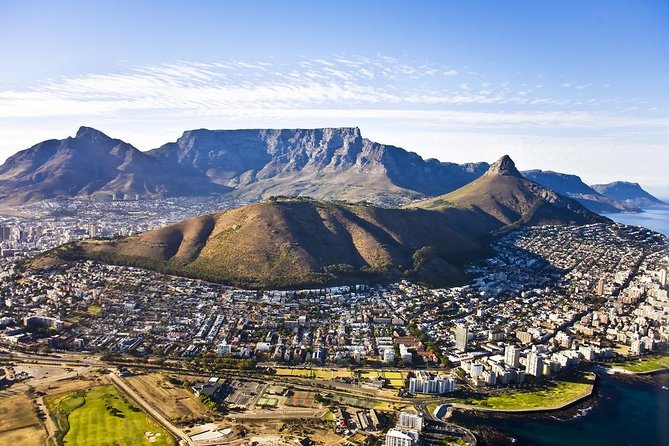 See the highlights of Cape town on a full-day tour, led by a local private guide! After enjoying panoramic city views from Table Mountain or Signal hill, head into town to see the sights up-close on a walking tour. Pass colonial-era sights such as Companys Gardens and the Castle of Good Hope, and then travel to Bo-kaap neighborhood for photos. Enjoy free time at the V&A Waterfront, and then finish the day with a drive along the dramatic Atlantic coastline. The itinerary is flexible and can be tailored to spend more time at the city tour's highlights that interest you the most.

Start your private tour with a pickup from your Cape town hotel, and then travel into the center of town by air-conditioned minivan. As you travel, chat with your guide about the city and the attractions that you want to see; the itinerary is flexible and can be tailored to the sights you want to see.

Perhaps start with a cable car ride up Table mountain, the citys famous UNESCO World Heritage site. The ride is at your own expense and subject to good weather conditions, but once at the top the views are magnificent. Alternatively, skip the ride and travel up Signal hill by minivan. The hill is a classic Cape town vantage point and a picturesque spot for ogling the city and beach vistas.

Return to town for a walking tour around Cape town itself. Wander past Companys Gardens, a colonial-era park boasting a pretty Rose Garden and large fish pond, and then stroll to the Castle of good hope. Pose for photos by the star-shaped fort while hearing tales of its 17th-century history when the Dutch East India Company built it.

Walk along Grand Parade and past several sites linked to the citys tenuous history with slavery such as Slave Lodge and the Old Slave Tree, and gaze at top Cape Town attractions including the Houses of Parliament and District six museum. Greenmarket square and St Georges Mall are also worked in to your route.

Return to your minivan for a visit to Noon Gun Cape Towns historical time signal plus the colorful neighborhood of Bo-kaap. Stop for photos by the candy-colored houses, and hear how the district has changed from a shanty town to a vibrant city neighborhood with a melting pot of cultures.

Enjoy a break at the V&A Waterfront for lunch and perhaps a boat ride around the harbor (both at your own expense). After enjoying some free time, meet back up with your guide, and then relax on a scenic drive alongside the Atlantic coastline. Watch the waves crashing against the jagged shores, and pass through swanky neighborhoods such as Clifton and Camps Bay. Your tour then finishes with a drop-off at your Cape Town hotel.

*Please note: Table Mountain Cableway will be closed to perform maintenance for about two weeks in July /August. Cable car tickets will not be bookable then but the hiking trails remain open. A visit to Kirstenbosch Botanical Gardens could be a suitable alternative during this period.

Personal comprehensive travel insurance is excluded and recommended to protect you against unexpected trip cancellation, lost or damage of personal items and other travel related reasons.