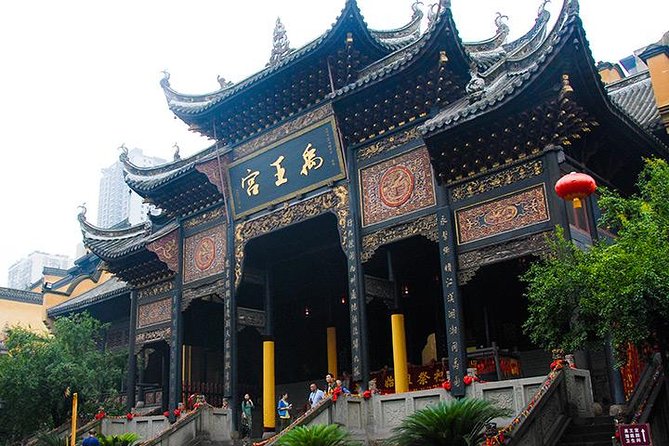 Visit the General Stillwell Museum and learn about the part Chongqing played on the side of the allies during WWII. Be amazed by the intricate detail of the Huhuang Guild Hall where early migrants would congregate. See the remains of the old Chongqing city walls at the Tongyuanmen Gate and finish your day strolling through the fascinating streets of Ciqikou Old Town.

Your guide will meet you in the lobby of your Yangtze River cruise boat just prior to disembarkation or in the lobby of your Chongqing downtown hotel. From there your private air-conditioned car will be waiting for you to commence your visit to the city of Chongqing. Chongqing is one of Chinas largest cities, with a population well in excess of 30 million and its geographical location at the confluence of two major rivers; the Yangtze and the Jialing, has enabled significant investment and development of industry to take place.

During the Second World War Chongqing became an important base for the allied forces of China and the USA who fought side by side against the fascist powers. Your first stop today will be at the General Stillwell Museum. The museum is housed in the building that served as a headquarters for the US General Stilwell when he worked alongside the Chinese fighting the Japanese. The museum contains many pictures of meetings between the leaders of the allied powers of the time as well as many maps of China and India and posters from the Burma Campaign. These include pictures of the First American Volunteer Group, a team of US pilots who became known as the Flying Tigers.

After visiting the Stilwell museum you go back in time with a visit to the Huguang Guild Hall. Chongqing grew on the back of immigration from others regions of China and as these waves of immigrants descended on the city meeting places or Guild Halls sprung up so that people could connect with countrymen from their own region.These Guild Halls became important not just for social meeting, but also as places to impose order and resolve disputes.You will find the Huguang Guild Hall a fascinating and peaceful environment as you wander around the many rooms and guild houses dating back 250 years to the Qing Dynasty.

Chongqing is renowned for its spicy cuisine and if that appeals to you then your lunch today will be a traditional Chongqing Hot Pot, or if you prefer a more traditional Chinese meal, then that can also be arranged.

After lunch you will visit the only remaining section of the old city walls at Tongyuanmen City Wall park before finishing your day at Ciqikou Old Town.The name Ciqikou comes from the word ciqimeaning ceramic and it was from here that ceramics were traded and shipped from the town pier during the Qing Dynasty.Now the old town is a collection of tea houses, craft shops and cafes, but just behind the main street you can still find old traditional buildings and temples to explore. You can enjoy a walk all the way down to the waterfront through this fascinating part of Chongqing.

At the end of your visit to Ciqikou you will be taken to your downtown hotel, where your tour ends.