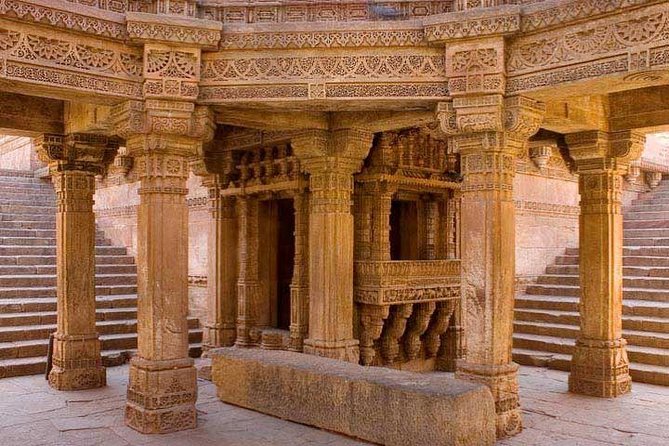 Excursion to two historic stepwells from Ahmedabad city. Rani ki Vav (the Queens Stepwell) is a UNESCO World Heritage Site. This stepwell is adorned with numerous panels with fascinating sculptures and pillars with intricate carvings. Also, the Adalji stepwell is octagonal in shape and supported by intricately carved pillars.

You will be picked up from your centrally located Ahmedabad City hotel at 9am in an air-conditioned vehicle and embark on a full day excursion visiting the two most famous stepwells of Gujarat. The Adalaj Stepwell and Rani ki Vav Stepwell are located, approximately 20 kms and 130 kms respectively, north of Ahmedabad City.

Stepwells, as the name suggests, are wells with steps leading down inside of it. These steps are used to gather water for drinking, bathing or washing. Stepwells have been constructed since the 3rd century and are a distinctive form of subterranean water resource and storage systems on the Indian subcontinent. They have evolved over time and have become elaborate multi-story works of art and architecture.These wells have been used as venues for colorful festivals and sacred rituals.

Rani ki Vav (the Queen’s Stepwell) is a UNESCO World Heritage Site located on the banks of the Saraswati River. It was initially built as a memorial to a king in the 11th century AD. Designed as an inverted temple, it is highlighting the sanctity of water and is divided into seven levels of stairs with sculptural panels; more than 500 principle sculptures and over a thousand minor ones combine religious, mythological and secular imagery, often referencing literary works.

Adalaj Stepwell is a unique Hindu 'water building' in the village of Adalaj, not far from Ahmedabad. This stepwell was built in 1499 by Muslim King Mohammed Begda for Queen Rani Roopba. The intricately carved stepwell is five stories in depth, made of sandstone and built on a large number of intricately carved pillars. The temperature inside the well is said to be about five degrees lower than outside during hot summers.

After the tour ends, you will be taken back to Ahmedabad City and dropped off at your hotel.

Group discount is available for group size of 2+ and 4+

Vehicle used for transportation will be air-conditioned