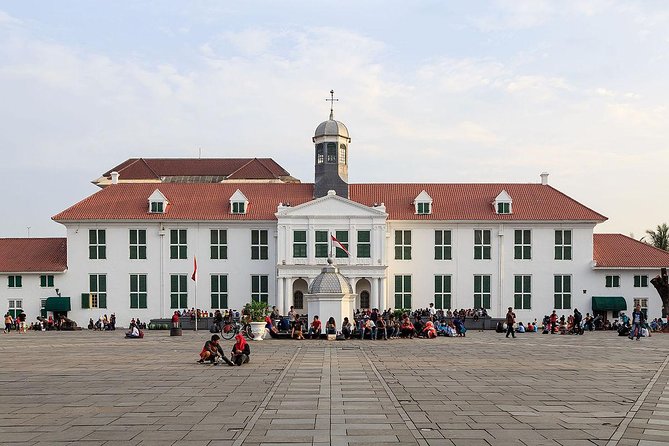 Join this private half day tour with your friends or family members to explore the history and real of local people ofJakarta. History of Jakarta Old City coming from Dutch East Indies Era, about 16th Century. Jakarta OldCity Tour programs has many interesting places to visit around West & North Jakarta. Old building coveralmost all area near by Kota Tua and Fatahillah Square that was build in early 17th century. such asJakarta Historical Museum, Puppet Museum, Sunda Kelapa Harbor and also Kota Intan Drawbridge.

Our tour guide will pick you up around 9am from your hotel lobby centrally located Jakarta. We will start our day tour by visiting Glodok China Town . Called Glodok is the oldest China town in Jakarta. Open markets, small shop with typical old Chinese Architecture, tiny alleys and charming cracked make this area a photographers paradise. Visit Petak Sembilan Chinese temple dedicated to the Buddhist goddess of mercy, Kuan Yin. Built around 1650.

Then pay a visit to Puppet Museum. An old Dutch colonial house which contain great collections of Javanese leather Wayang puppets. Wooden Golek puppets and mask of Indonesia and some other part of the world. The former old Dutch Governor General graveyard also was here.

Then move for enjoying Puppet Show. A very short time show for the Puppet performance and you will be exhausted entertaint by the Dalang or the Puppet player, the show performance in English, here after the show finished you also could know how to make a puppet.

Continue on to Jakarta Historical Museum. Originally built by Dutch in 1707 as Jakarta City Hall or stad huis. Furnished with antique furnishing, porcelain, old map and portraits, under water jail and other items used by former Dutch Governor General.

Finally, you will visit to Sunda Kelapa Harbor. A kilometre north of Taman Fatahillah, the old port of Sunda Kelapa is full of magnificent Makassar schooners (pinisi). The dock scene here has barely changed for centuries, and porters unload cargo from these sailing ships by hand and trolley. Sadly, the port itself is rundown and its waters grotesquely polluted these days.

Round Transportation by a Private Air Conditioned Vehicle

Any other things not mentioned in the itinerary