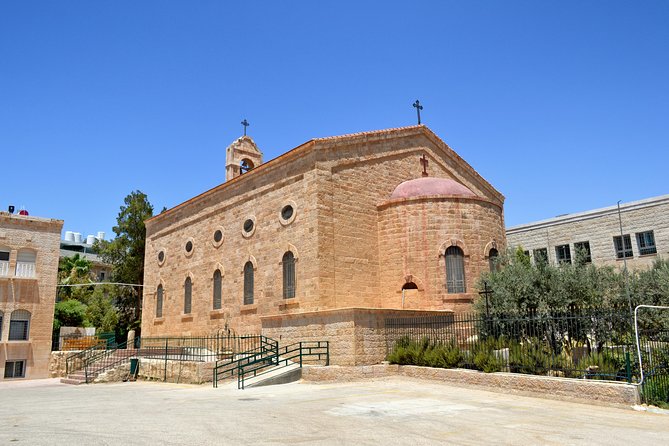 Explore Madaba, Mount nebo, and Amman all in one fascinating private trip. With a knowledgeable private driver, travel by air-conditioned vehicle to Madaba to see the Madaba Mosaic Map, a 6th-century church floor mosaic depicting the Holy Land, and other regions in rich detail. Then, admire the sweeping views and beautiful church mosaics of Mount nebo, where Moses is believed to have been shown the Promised Land. Finish with a tour of top Amman attractions including The citadel, and the stunning Roman Amphitheater, built in the 2nd century A.D.; as well as Jabal Al Webdeih and Jabal Amman Quarters.

Depart your Amman hotel by a private leisure air-conditioned vehicle with English Speaking Driver who doubles as your guide, and set off on your private tour, traveling to Madaba the city of mosaics.  After around an hour, arrive at Saint Georges Church, the 19th-century basilica in the heart of the town. This famous church houses the Madaba Mosaic Map, an intricately detailed floor mosaic of the Holy Land believed to have been created in the 6th century A.D. Admire the church interior and marvel at the stunning floor map, with its evocative depictions of ancient Jerusalem, Jericho, and lands including the Lebanon, Sinai, and Egypt. Continue to Mount nebo, the hill where Moses is believed to have gazed out over the Promised Land. Absorb the sweeping views over the Dead sea and Jordan Valley, and visit the Byzantine church on the summit to see its fabled mosaics. Behold the luminous pieces of early art and their vivid recreations of animals, people, and hunting wine making scenes in this beautiful Franciscan Monastery.

Return to the capital of Amman, for a tour of the citys highlights. Drive around the downtown area past animated markets, churches, and mosques like King Abdullahs mosque. Pass King Husseins Palace, where the late, revered king is laid to rest. Discover the Roman, Byzantine, and Islamic-era ruins of Amman citadel for a view point. Gaze in awe at the Roman Amphitheater, carved into a hillside in the 2nd century B.C. and the most important remnant of Ammans predecessor, the Roman white city of Philadelphia. Free time at leisure in Amman downtown area for souvenir shopping in the local gold and spice markets. Your tour then concludes by strolling along Jabal Al Webdeih and Jabal Amman Quarters, the Rainbow street, Ammans colorful arts and shopping hot spot. Delve into the upscale neighborhoods of Abdoun and Swefieh, where luxury shopping malls and swanky private villas line the streets. After passing thru the modern Amman drive back to your hotel.