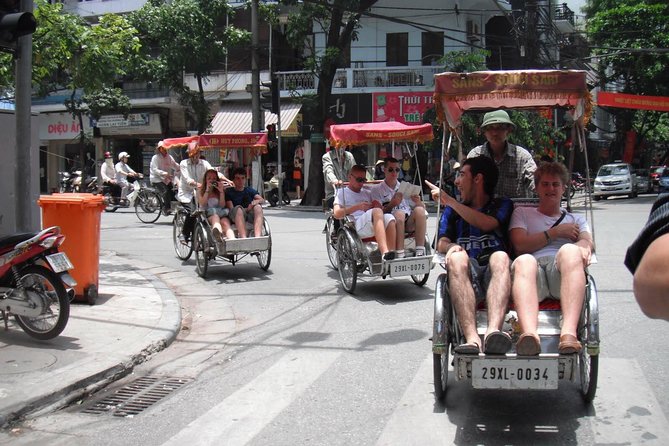 Take in Hanoi's notable landmarks during a full day of private sightseeing that includes a cyclo tour to the Old quarter and a water puppet show. Vietnams capital maintains 2,000 well-preserved cultural, architectural and historical sites. Your tour includes visits to the Ho chi minh mausoleum, Temple of literature and Vietnam museum of ethnology, plus structures like One pillar pagoda and Ngoc son temple. Enjoy breakfast and lunch, starting your day with coffee and completing it with a refreshing beer. Hotel pickup and drop-off by air-conditioned vehicle are included.

Start your full-day private tour of Hanoi with early pickup from your hotel. Then hop in a cyclo to the undisputed heart of the city with your friendly and informative guide. Observe people practicing tai chi, playing badminton and doing other popular activities as you receive an overview of daily life and witness how locals occupy their mornings.

Weave through Hanois Old quarter in the historical center of the capital, known for its 36 old streets and artisan guilds that date back to the 13th century. Youll end up at St Josephs Cathedral (Nha Tho Lon), whose structure has changed little since it was built in 1886.

Stop for a quintessential Vietnamese breakfast of pho bo (beef noodle soup) and enjoy a relaxing conversation with the locals over a cup of delicious coffee a great way to immerse in the culture of Hanoi. Test your language skills as your guide teaches you to order ca phe nong (hot black coffee, usually with sugar) or ca phe sua nong (hot coffee with sweetened condensed milk).

Afterward, continue sightseeing in the comfort of an air-conditioned, private vehicle with a visit to Ba Dinh Square, where your guide points out significant buildings such as the Presidents Palace and the Ministry of Foreign Affairs.

Learn about President Ho Chi Minhs life and his career at the Ho chi minh mausoleum and discover the role of Buddhism in Hanoi at the historical One pillar pagoda, considered one of Vietnam's most iconic temples with its typical architecture, originally built in 1049.

Before a traditional Vietnamese lunch at Ngon restaurant, youll gain an appreciation for Vietnamese architecture at the Temple of literature, the first university of Vietnam, and view Long bien bridge, built during the French occupation.

In the afternoon, discover the many customs of more than 50 ethnic minorities in Vietnam at the Vietnam museum of ethnology. Then enjoy the beautiful environs of Hoan kiem lake (Sword Lake), stopping by Ngoc son temple (Temple of the Jade Mountain), situated on a small islet in the lake.

Finally, your guide accompanies you to see a water puppet show. This delightful stage performance delves into Vietnams mythology and traditions for a little over an hour.

Finish with a personalized experience of local beer at Bia Hoi Junction (aka Bia hoi corner) where you can sit outside as the city whizzes past, before youre taken back to your hotel.