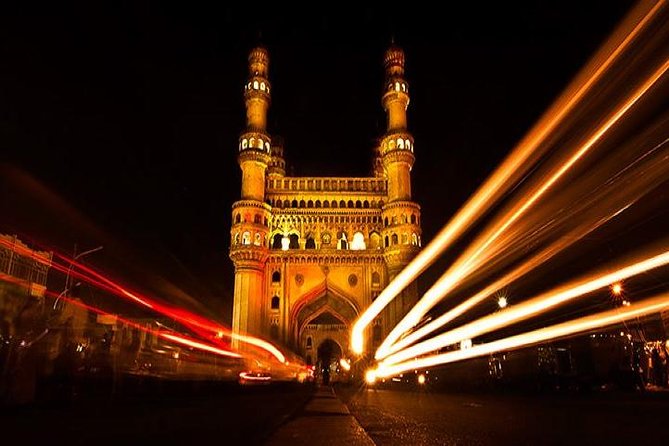 Visit the highlights of the majestic city of Hyderabad that was a part of a larger Hyderabad State ruled by sovereigns called Nizams. Behold the Charminar an imposing monument dominated by four minarets and visit Grand Mecca Masjid, the oldest mosque in the city. We will also take you to the Salar Jung Museum, a treasure trove with its variety of artifacts and well preserved exhibits and the Chowmahalla Palace with its massive Durbar hall. Experience a calm expanse of water in the city the Hussain sagar lake

Pickup from your hotel and start the full day city tour with a visit to Charminar. Charminar is an imposing monument that reflects the glory of the Qutub Shahi Dynasty. It is a massive square structure of 56m (183.72 ft) high and 30m (98.42 ft) wide. This monument is built entirely of granite and lime mortar. It has total four minarets and one on each corner. These fluted minarets are attached to the main building and rise towards the sky to a height of 56m (183.72 ft) with a double balcony each. This great tribute to aesthetics looks sturdy and solid from a distance but, as you move closer, it emerges as an elegant and romantic edifice proclaiming its architectural eminence in all its detail and dignity.

Nearby visit the Grand Mecca masjid, the oldest and largest masjid in the city. Muhammed Quli Qutub Shah began building it in 1617 under the supervision of Mir Faizullah Baig and Rangiah Choudhary. Mughal emperor Aurangzeb completed the construction in 1694. It took 77 years to come up as the magnificent edifice we see today.

Next stop is the Salar jung museum, an art museum located at Darushifa on the southern bank of the Musi river. It has a collection of sculptures, paintings, carvings, textiles, manuscripts, ceramics, metallic artifacts, carpets, clocks, and furniture from Japan, China, Burma, Nepal, India, Persia, Egypt, Europe, and North America. The Salarjung Museum is the third largest museum in India housing the biggest one-man collections of antiques in the world. It is well known throughout India for its prized collections belonging to different civilizations dating back to the 1st century. Former Prime Minister of the seventh Nizam of Hyderabad spent a substantial amount of his income over thirty five years to make this priceless collection as his life's passion. Old timers believe that the present collection constitutes only half of the original art wealth collected by Salar Jung III.

We will also visit the Chowmahalla palace that was once regarded as the center of Hyderabad. The magnificent Chowmahalla palace was the seat of the Asaf Jahi dynasty where the Nizams entertained their official guests and royal visitors. Built over 200 years ago, Chowmahalla is renowned for its unique style and elegance. A synthesis of many architectural styles and influences, the palace complex has been meticulously restored. The palace complex includes a couple of courtyards, a clock tower, a council hall and an ornate and expansive Darbar Hall where used to cater to more than 7,000 attendants.

Stopover the majestic Hussain sagar lake en-route. The lake is spread across an area of 5.7 square km and a 18m high monolithic statue of the Gautama Buddha was erected in 1992 standing on an island located in the middle of the lake. When the tour is concluded, we will take you back to your hotel.

Hotel pickup and drop-off in Hyderabad