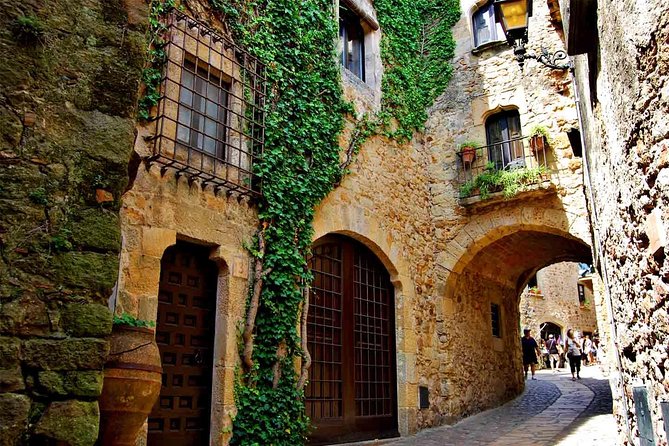 Visit the medieval towns of Pals and Peratallada on this tour from Girona. Accompanied by your own local guide, take a journey through the cultural and natural heritage of Catalonia. Hotel pickup and drop-off, if possible, are included.

Start your private day trip from Girona by travelling to Peratallada, a town in the county of Baix Empord. Its name is derived from 'pedra tallada', meaning 'carved stone'. Declared a historic-artistic monument, most of the buildings are built from stone carved from the 'fosse' or moat which still encircles parts of this small fortified medieval town. The privately owned Castle of Peratallada is the dominant structure in the center of the town, with a 13th-century Romanesque church dedicated to Sant Esteve (Saint Stephen) outside the town walls. The castle has been documented as early as 1065 AD and it was restored as a luxury hotel in the 1960's. During restoration, traces of settlement were found that date back to the Bronze Age.
Today, Peratallada is known for its beautiful old stone buildings, rutted stone streets and passageways. Its proximity to the beaches of the Costa Brava and its numerous restaurants, small boutique hotels and artists' galleries make it a popular destination. The 1991 film 'Robin Hood: Prince of Thieves' was partly filmed on location here. Then make your way to Pals a medieval town a few kilometers from the sea in the heart of the Bay of Emporda on the Costa Brava. Find yourself on its historic center on a hill surrounded by plains with a medieval Romanesque tower built between the 11th and 13th centuries, known as the Torre de les Hores (Tower of the Hours). A clock tower, it is 15 meters high
The Gothic Quarter of the town has been substantially restored and there are cobbled streets interrupted by semicircular arches, faades with pointed arched windows and stone balconies. The town wall contains four square towers which date from the 4th century. This tour is hosted by a local guide, don't hesitate to list any special interests you have to alert the guide and make a trip that suits your interests.

A minimum of 4 or 6 people per booking is required