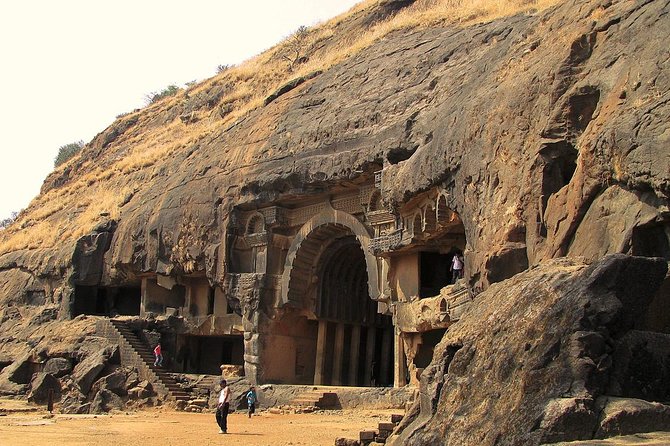 Journey back in time on this private tour from Mumbai to ancient Indian rock-cut caves. You have three cave options to choose from: the Kanheri Caves, the Elephanta Caves or both the Karla Caves and Bhaja Caves. With your knowledgeable private guide, explore one of these cave complexes to discover the early phases of Buddhist architecture, known as the Hinayana phase, and marvel at the incredibly detailed representations of Buddha carved into the rock walls. Your tour includes private air-conditioned transport, a traditional Indian lunch (depending on tour option selected) and entrance fees.
** During the monsoon season between June 15 and September 15, 2014, tours of the Elephanta Caves will be subject to weather conditions permitting. Tour will not operate under rainy conditions or during high tide.

In the morning, you will be picked up from your Mumbai hotel by your private guide and taken to the caves of your choice. Along the way, enjoy scenic views of the Indian countryside, including sprawling valleys and quaint villages. In between sightseeing, enjoy a traditional Indian lunch at a popular local restaurant (depending on tour option selected), and at the end of your tour, relax on the private drive back to your hotel.

After a 1-hour drive, reach the Kanheri Caves, located deep within the green forests of Sanjay Ghandi National Park, one of Asias major national parks. Dating back from the 1st century BC to the 10th century, these cave systems offer a window into the lifestyle of an ancient Buddhist settlement. As you explore the caves, your guide will point out which areas were meant for living, studying and meditation, and which areas were designed as worship halls. Marvel at the system of canals and cisterns and learn how they provided water to the caves inhabitants.

In the morning, youll head to the Gateway of india in Mumbai to board a ferry to Elephanta island. This 1-hour cruise will afford you picturesque seaside views. With your guide, explore all seven caves on the island, some of which are so small and hidden that theyre often easily missed. Enter the main cave, an impressive sprawling structure with high ceilings and towering support beams, columns and pillars. On each wall, admire the complex and astoundingly detailed reliefs and carvings depicting narratives of the goddess Shiva.

After a 1.5-hour drive, reach the Bhaja Caves, a group of 22 rock-cut caves dating all the way back to 200 BC! Discover several excavations including ancient viharas (Buddhist monasteries) and chaitya-grihas (Buddhist assemblies or prayer halls), considered to depict the earliest architecture of their kind. Admire the highly decorated facade, which presents a true replica of a 2nd-century wooden structure, and the series of unique reliefs depicting Indian mythology, including stories of the sun god Surya.

At the Karla Caves, walk up the 500 steps of gradual incline to reach the entrance, where youll stand in awe of the Ekvira Mata Mandir, a temple dedicated to Hindu goddess Ekvira. Marvel at the vastness of its shrines and prayer halls, with their notable arched entrances and vaulted interiors featuring carved animals and images of Buddhist goddesses.

Lunch (Elephanta Caves and Karla and Bhaja Caves tours only)

Due to uneven surfaces, this tour is not recommended for those with walking disabilities or using a wheelchair; comfortable walking shoes are recommended